2 Servitors Injured During Construction Of Lord Jagannath Chariot in Puri 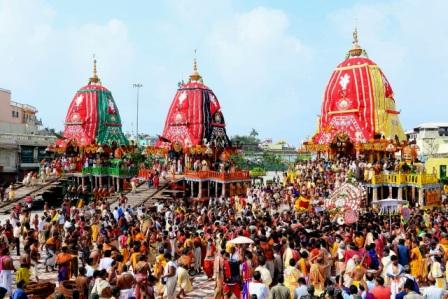 According to sources, the incident took place while the construction of the chariot of Lord Jagannath, Nandighosh, was going on in ‘Rath Khala’ (chariot making workshop) in the town.

Rupakar servitor Kahnu Mohapatra and Bhoi servitor Bishnu Bhoi were among others engaged in making the chariot whose structure has reached completion stage. Accidentally, the fingers of both servitors got trapped between two heavy wood logs and were pressed.

Other servitors managed to pull their hands out but they sustained injuries in their fingers which started bleeding. Both Kahnu and Bishnu were admitted to the district headquarters hospital (DHH) in the town. Following treatment, their condition was stable, hospital sources said.

It may be noted that a crack was detected in an axle of Nandighosh chariot by the servitors a few days back. Biswakarma servitors replaced the axle on recommendation of an inspection team after a thorough check up.

As per practice, all the three chariots of Lord Jagannath, Lord Balabhadra and Devi Subhadra are under construction at the ‘Ratha Khala’ for world famous Rath Yatra scheduled to be celebrated in Puri on July 1.

WHO Is Changing The Name Of Monkeypox; Why?