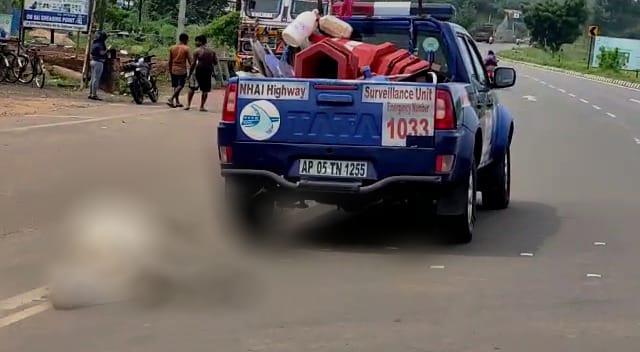 Berhampur: Two employees of the National Highway Authority of India (NHAI) were suspended after a video surfaced showing the carcass of a cow tied to a tractor with a rope was dragged in Odisha’s Ganjam district on Monday.

According to sources, the cow was killed after being hit by an unknown vehicle on National Highway No. 16 in Chhatrapur.

As a result, vehicular movement was disrupted on the highway. On being informed, the NHAI’s patrolling team arrived at the spot.

The NHAI team tied the cow’s carcass with a rope at the rear of the patrolling vehicle and dragged it.

A video of the same went viral on the internet following which some organisations agitated against the incident. Following protest from different quarters, NHAI suspended the driver as well as the supervisor and said that such an incident will never be repeated.