AchieversEntertainment
By OB Bureau On Sep 21, 2020 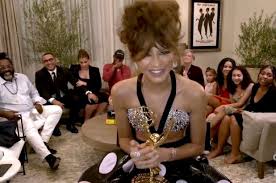 Mumbai: Zendaya made history at the Emmy Awards, which were held virtually this year amid the COVID-19 pandemic. The 24-year-old Hollywood actress and singer became the youngest winner of the prestigious award as well as the second black artist to receive the accolade.

Zendaya follows in the footsteps of Viola Davis, the first black woman to win the best drama actress award — for her performance in ‘How to Get Away With Murder,’ in 2015.

“I usually don’t cry. I got through it without letting it take over me. It was a very emotional moment. I still can’t believe it myself. It’s pretty crazy.” Zendaya said in a virtual backstage interview following her win.

In Euphoria, Zendaya plays Rue Bennett, a teenaged addict struggling with her sobriety and recovery on the series that delves into sex, drugs, trauma and identity among high-schoolers.

“I just want to say there is hope for the young people out there,” she said. “I know our TV show doesn’t always feel like a great example of that,” but she thanked them for “doing the work.”

Zendaya said she was grateful to share the moment with family and friends despite the global pandemic, which has restricted interaction with loved ones.

It was her first Emmy nomination and win. She has been trending on social media. Check out some of the fans’ reactions:

this scene was so so good and the fact that it was improvised is even greater. the part where rue comes after her mom with the piece glass made sam cry in his office. he said they really tapped into the "ugly volatility of addiction." #Emmys  #Zendaya pic.twitter.com/2p9PAtzIPR

YALL I AM SOBBING IN THE GYM OF MY DORM ROOM #zendaya pic.twitter.com/l2QwjMqKaE

Odisha’s Shreya Lenka Almost There, One Battle Away From Becoming 1st K-Pop…