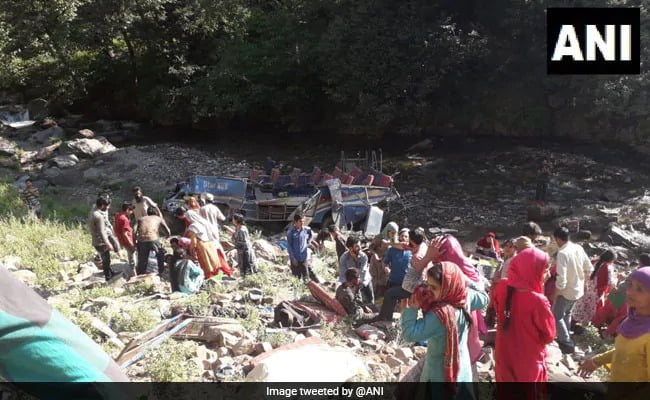 At least 33 people were killed and 22 injured after a minibus rolled down a hilly road and fell into deep gorge in Jammu and Kashmir’s Kishtwar district on Monday, various websites reported quoting ANI.

“Thirty three people have died and 22 injured after a matador vehicle coming from Keshwan to Kishtwar fell into a gorge, today,” deputy commissioner of Kishtwar, Angrez Singh Rana, told ANI.

A PTI report said that the bus skidded off the road at Sirgwari and rolled down into the gorge around 7.30am on Monday.

Relief and rescue operation is underway and the injured are being shifted to hospital.

Amit Shah tweeted saying “Extremely saddened to learn about the loss of lives due to a road accident in Kishtwar, Jammu & Kashmir. My deepest condolences to the families of those who lost their loved ones. I pray of the speedy recovery of those injured.”

Mehbooba tweeted saying: “Saddened to hear about the tragic accident in Kishtwar. Deepest condolences to families of the bereaved.”

Omar tweeted saying: “Terrible news coming in about the high death toll in a bus accident in Kishtwar. Condolences to the families of the deceased & prayers for the swift recovery of the injured.”