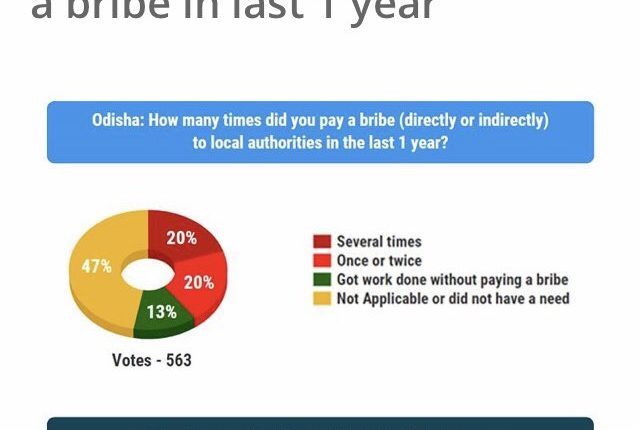 Bhubaneswar: Odisha is among the least corrupt states, which also include Delhi, Haryana, Gujarat, West Bengal, Kerala, and Goa, in the India, which saw an overall drop in bribery from 56 per cent in 2018 to 51 per cent this year. But the figure for 2019 was higher than that for 2017, when it was 45%.

If the India Corruption Survey 2019 by non-governmental anti-corruption watchdog Transparency International India along with Local Circles, a social media firm, is to be believed, only 40 per cent denizens of Odisha paid bribe in the last one year.

The result was calculated from 1.9 lakh responses from about 81,000 unique respondents in 248 districts across 20 states.

To the question, how many times did you pay a bribe (directly or indirectly) to local authorities in last one year, Odisha responded:

A good 13 per cent said that they could get the government work done without paying a bribe.

Bribes had to be paid the most in matters of property registration and land, Transparency International India added.

27% had paid bribes once or twice

35% admitted have paid bribes in cash.

16% said that they paid a bribe in an office with a functional CCTV system.

Odisha Capital On Toes For End To Traffic Law Relaxation