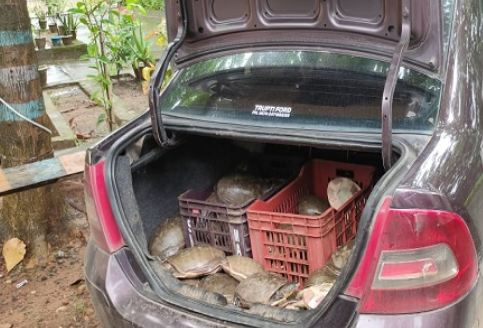 Malkangir: A total of 77 turtles of rare species were rescued and three persons taken into custody by Odisha’s forest department sleuths in Malkangiri district on Sunday.

Acting on specific information, a team of forest department officials launched an operation in MV 79 area and intercepted a car coming from Andhra Pradesh. A thorough search of the vehicles led to the recovery of the rare turtles, sources said.

The rare animals were being illegally smuggled into Odisha from the neighbouring state. Some of the 77 recovered turtles were suspected to have died during transportation.

An investigation has been launched into the matter and the three persons held by the forest officials are being questioned.

The recovery of the rare animals came around a fortnight after over 350 turtles were rescued by forest officials during a raid at a village in Kalimela area of the district in August.

Survival of the turtles in the wild has come under severe threat and their population is fast dwindling due to consumption and illegal trade. Many turtle smugglers have been active in Odisha and Andhra Pradesh for the last few years.

Smuggling of turtles, a Class I species of the water animal, is a non-bailable offence under the Wildlife Protection Act, 1972, officials said, adding that turtles are used for meat, medicines and other purposes.