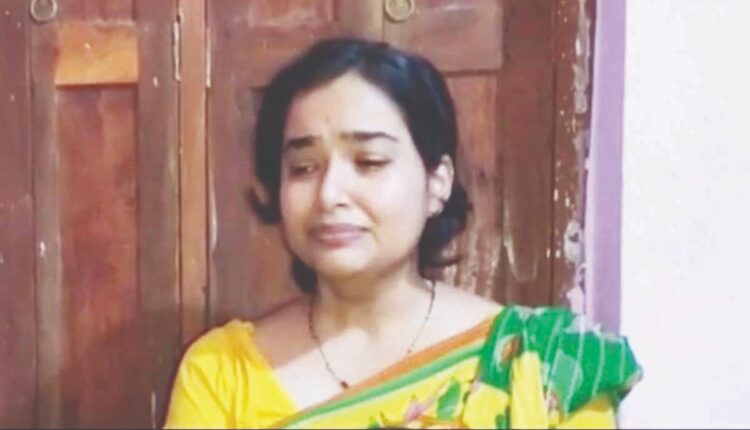 Share
Bhubaneswar: With Paralakhemundi Assistant Conservator of Forests (ACF) Soumya Ranjan Mohapatra’s father pointing accusing fingers at her for his son’s death, the deceased’s wife Bidyabharati Panda on Wednesday broke her silence by describing it to be an accident.
Following Soumya’s death due to serious burn injuries on Tuesday, his father Abhimanyu Mohapatra termed it a “pre-planned murder” and blamed his daughter-in-law for it.
Soumya’s family alleged she feigned ignorance about how he sustained third-degree burns and could not give a satisfactory answer about the circumstances leading to it. They also alleged that she used to torture Soumya.
Debunking the allegations, Bidyabharati said they were very close as husband and wife. “My in-laws are falsely spreading rumours that I have lost my mental balance,” she maintained.
Narrating the sequences of the incident on Monday night, Bidyabharati said they engaged in friendly banter as Soumya began teasing her while she was playing games on her mobile phone.
“I then went to the kitchen to ready the dinner table. When I came back to the room a few minutes later, I found Soumya’s shirt had caught fire. I immediately rushed to get the clothes off him and in the process sustained burns on my hand,” she told mediapersons.
“I then ran to the bathroom to get a bucket of water to douse the flames but slipped and fell down. I cried for help. Hearing my screams, neighbours rushed to the house and found a badly burnt Soumya,” she added.
Soumya was admitted to Paralakhemundi hospital with over 80 per cent burns. As his condition was critical, he was rushed to MKCG Medical College and Hospital, Berhampur, and later shifted to a private hospital in Cuttack, where he succumbed on Tuesday morning.
With Soumya’s family putting the blame on her, Bidyabharati has returned to her parental house at Gaudagaon village under Kaptipada block of Mayurbhanj district. Bidyabharati married Soumya last year and was staying with him in Paralakhemundi.
Police said they had recorded the forest officer’s statement in presence of a magistrate before his death. A case has been registered and investigation is on to ascertain the reason behind the fire which led to the ACF’s death, SDPO Ramkrushna Pati said.
Share FacebookTwitterGoogle+ReddItWhatsAppPinterestEmail