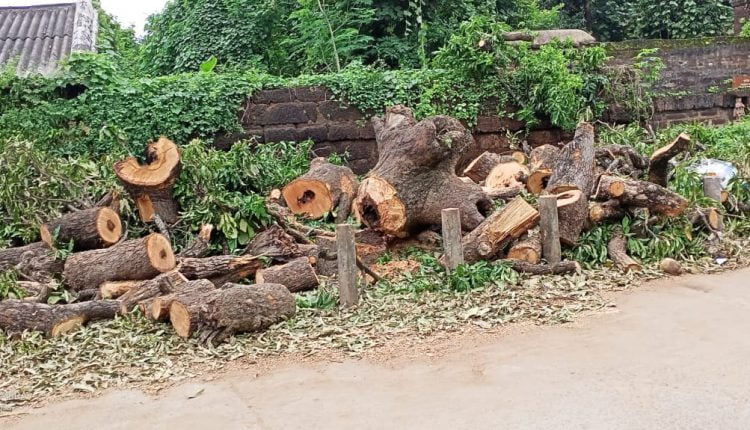 Bhubaneswar: While the demolition of the old structures under the Ekamra Kshetra Development plans has been on hold  in the Old Town of Bhubaneswar ever since the Suka Sari episode, the authorities have now gone on a tree felling spree for road widening.

Earlier it was the old structures, houses, temples and mutts which were razed down flouting all norms. The intervention of heritage activists had spurred the National Monument Authority and the Archeological Survey of India to intervene and stop all activities. The enormity of the damage already done was highlighted and all activities around the Lingaraj Temple were stopped. The Ground Penetration Radar survey was undertaken, the report of which is still awaited. The fate of the administration’s ambitious beautification drive is in limbo.

Even during the earlier demolitions, at least 250 old trees of various sizes were cut down. A large number of neem, banyan, mango, jamun and jackfruit trees had been felled. In a shocking move, the authorities have cut two ancient banyan trees, which were situated outside the Emar Mutt on Friday and have plans to fell three more iconic trees in the area in the name of widening the road.

These trees have taken many years to grow and can live for more than four to five  hundred years. The loss of even one tree in vicinity can cause an imbalance in the natural wealth and health of the surrounding area. The tree that was felled outside the Emar Mutt was at least 300 years old, the other one which faces the axe is even older.

All these trees had small shrines built at the base with gods and goddesses who have been worshipped since ages. All of these trees were part of the religious traditions and festivals of the temple city. They are rookeries for the birds that nest here throughout the year, especially the water birds who feed in the local ponds and the Bindusagar. While many of the locals are heartbroken, a few are stoically bearing the loss. All the trees had thick canopies and are resting places for both humans and cattle.

Though transplantation and translocation of trees is an age-old activity the world across, it is rarely looked to as a solution in India. Each one of these trees could have been translocated to another site, albeit at a cost.

In March this year, the Forest and Environment Department had told the Assembly that a whopping total of 18.5 million trees were felled for widening roads in the past decade.  Earlier, in December 2020, the Supreme Court of India, while hearing a plea on cutting of trees for a road project in Uttar Pradesh, had said, “Why do roads have to be laid in a straight line by cutting trees? Keep roads zigzag. It will reduce speed; lessen accidents on roads and save many lives.”

Prafulla Swain, a sevayat and local activist local who spearheaded the campaign against the demolitions, is of the opinion that  each of these trees could have stayed in place with the road running around it.  The short stretches of the roads that are being widened will never have speeding traffic; these roundabouts will be proper speed breakers.  Besides the smart city plans envisage a bus-stand near the present Sanatorium Chakk, where land has already being acquired. No heavy traffic will be allowed in the periphery of the Bindusagar reservoir,  so the need for extra-wide roads is just not there.

The Old Town area was thickly wooded till the last part of the previous century. There were many thickets of heavily wooded trees near most of the temples. Many of the iconic trees have been felled, but on a recent count there are nearly 200 ancient trees spread all over the place. I am compiling a list of these trees and will ask the authorities to declare them as heritage trees that will have protection just like the temples.  Many of the old  photographs and sketches of the temples have the trees shown in them, many of which still exist. The thick Banyan tree outside the Parashurameshvara Temple is seen in the drawing made by Rajendralala Mitra in the 1965  book on the Antiquities of Orissa.

The Haryana government had recently launched a pension plan for the old trees; a fixed annual amount will be given for their protection. It is time that the Odisha Government too wakes up  and implements such a scheme in  the state.

(The author is a noted historian. The views expressed in the article are that of the author and do not necessarily reflect the official policy or position of the website)

Olympian Neeraj Chopra Fulfills Another Dream! Takes His Parents On Their Maiden Flight!