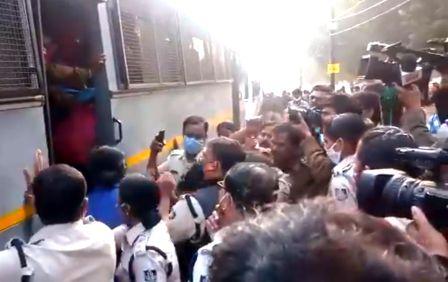 Bhubaneswar: The Commissionerate Police on Saturday picked up Auxiliary Nurse Midwife (ANM) workers agitating at Lower PMG square on the Gandhi Marg in the city.

The ANM protestors, who have been demanding regularization of jobs for more than two months, had a scuffle with the police as they were forcibly picked up.

Earlier, the Commissionerate Police had asked the agitators to vacate the dharna site at Lower PMG Square for the state-level Republic Day Parade.

On Saturday, the protesters told the media that they have decided to vacate the place for the time being due to the Republic Day celebrations. But they will continue their protest till the state government fulfills their demands.

It may be mentioned that the state government had engaged some 21,000 ANMs, staff nurses, and pharmacists on a daily wage basis for three months for the smooth functioning of COVID Care Homes (CCH). Later, it decided to disengage them after the improvement in the pandemic situation.

Protesting the government’s decision, the ANM workers staged a dharna demanding regularization of their jobs. Even two ANM workers had also tried to self-immolate on December 15 last year.

Also Read: High-Touch Care For The Elderly In Bhubaneswar & Cuttack