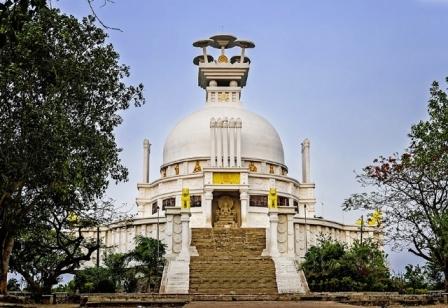 Bhubaneswar: The Odisha government has come under opposition attack over the alleged felling of over 3000 trees at the Dhauli-based Shanti Stupa (Peace Pagoda), on the outskirts of Bhubaneswar, for beautification work for its golden jubilee celebration from October 27.

Jatni Congress MLA Suresh Kumar Routray on Tuesday severely criticised the indiscriminate cutting of trees, even those not falling within the beautification area. Claiming that many were planted long back during the tenure of Harekrushna Mahatab, he questioned the necessity of cutting the 50 years old trees.

Major works that have been taken up included examination of the structural stability of the Stupa, structural grouting, micro concreting, marvel flooring, widening and flooring of the front platform, pavement pathway on both sides, landscaping, beautification, anti-carbonation painting and waterproofing of the Stupa and lift from ground level to the main platform.

Decrying the beautification project, Routray further said that one gets blisters on foot while walking on the granite tiles which have been laid at Dhauli. “A lift which has been installed at a cost of Rs 55 lakh for the Dhauli function should not be removed after the occasion is over,” he demanded.

BJP’s Bhubaneswar district president Babu Singh also said that his party will raise its voice against the felling of trees.

Science and Technology Minister Ashok Panda, however, maintained that only 40 trees were trimmed and not uprooted for the beautification work.

Chief Minister and foreign delegates are scheduled to visit the monument for a programme which includes a peace march on October 27.