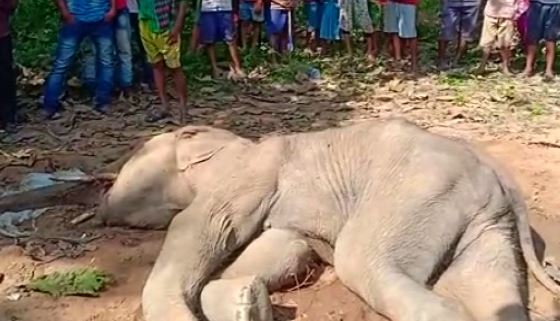 Cuttack: After day from being rescued, an ailing tusker died while undergoing treatment at Choudwar in Odisha’s Cuttack district on Sunday.

Notably, locals had spotted the male elephant in a farmland near Haladibasanta village under Dalijoda Forest Range on Saturday. It had sustained injuries and was unable to move.

On being informed, a team of veterinary doctors from Tangi along with forest officials reached the spot and started treatment. Experts from OUAT later took over the task as its deteriorating condition.

The jumbo, which had developed infection in the mouth, succumbed this morning.

In August, another ailing tusker had died at Patharkhamb village under Kamakhyanagar West Forest Range in Dhenkanal district.

The elephant was found dead near the foothills of Landabir. It was 40 at the time of death. The pachyderm was earlier rescued by forest officials, who found it in a critical condition, and was released into the forest after the required medication.