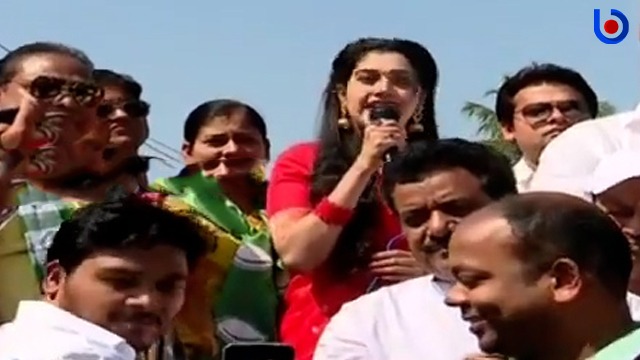 Varsha, the estranged wife of actor-turned-politician Anubhav Mohanty, was seen moving in a campaign vehicle of BJD along with senior ruling party leaders and waving at people, in what is seen as her first appearance in electioneering.

While Anubhav, Lok Sabha member from Kendrapada, has been kept away from campaigning since the 2019 general elections, Varsha was seen actively taking part in ruling BJD’s campaign in the Assembly segment in Bhadrak district.

Describing herself as a big fan of Chief Minister Naveen Patnaik, the actress said she joined the poll campaign after being inspired by the BJD president. “I have come here because of Naveen Sir and sister Abanti,” she said.

Hailing the Chief Minister for espousing the cause of women empowerment, Varsha said if a woman makes progress in her life it will bring development not only for the family but for the state and the country also.

Her name, however, did not feature in the 40-star campaigners’ list for Dhamnagar released by the ruling party of Odisha.

Anubhav, on the other hand, was left out of the list again after being given a cold shoulder in all the previous 5 bypolls – Balasore Sadar, Trito, Pipili and Brajarajnagar. If insiders are to be believed his marital strife has robbed him of his star campaigner tag as the party fear backlash if he is at the forefront of the campaign.

School and Mass Education Minister Samir Dash also failed to make it to the list after being dropped as a district observer. The minister recently landed in a soup with the opposition BJP and Congress baying for his blood over his suspected role in the alleged death by suicide of BJD Zilla Parishad member Dharmendra Sahoo.