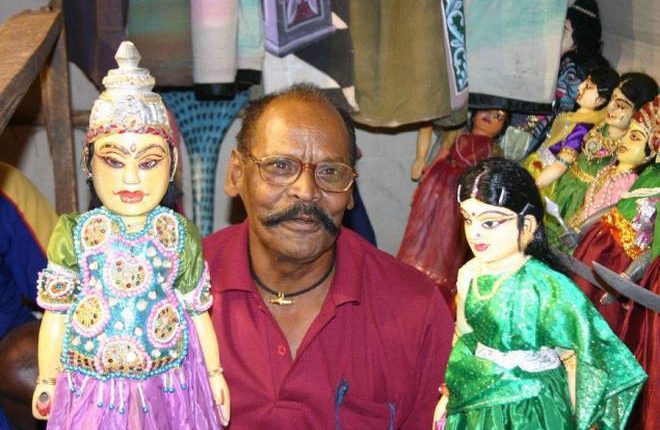 84-year-old Maguni Charan Kuanr of Keonjhar is a cult figure among puppeteers as the pioneer of the highly-stylised rod puppetry tradition of Odisha, locally known as Kathi-Kandhei Nacha. 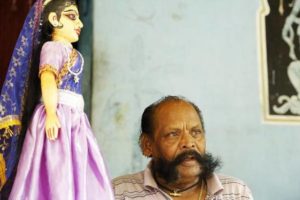 Excerpts from an interview with Odisha Bytes:

Being the son of a zamindar, it is unusual that you preferred to become a puppeteer.

It’s true that I did not belong to a family of traditional puppeteers. My father was a zamindar in the formerly princely state of Keonjhar. So I was not expected to get into puppetry, which was then considered as a vocation of Dalits.

The poor puppet players of our locality used to put up their shows in front of our houses in order to get some alms. But I grew up watching them perform puppetry and I loved their shows and longed to learn it.

My curiosity was limited to learn their tricks to make the puppets dance like they did. With the help of a carpenter who used to make puppets, I got to secretly meet the master puppeteer and started learning the art from him. When the master passed away, he had no successor. I was keen that the show must go on. So I decided to perform puppetry in public despite my father’s stiff resistance. I was barely 20 then.

You would be surprised to know that my grandmother supported me to start my puppetry troupe, Utkal Biswakarma Kalakunja. 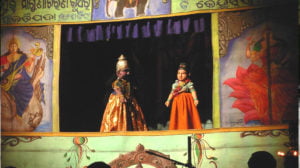 How is your style different from the others?

We have four forms of puppetry in India — string, glove, shadow and rod — and Odisha is the only state to have all these four styles. In Odisha, rod-puppetry is found only in Keonjhar, my hometown.

Since the puppets are fixed on a wooden rod, it is known as rod puppetry. My puppets are the tallest and heaviest of all. Unlike the string puppeteers, who operate from above, I do it from below so that it gives me more freedom to manipulate. Of all, rod puppetry is the most stylised, dramatic and sophisticated. It follows a definite format akin to the grammar of proscenium theatre.

For a year now, I have been engaged in an innovative project with my puppetry. I am developing and designing puppets from paper pulp to replace the usual wooden puppets that I have been working with for nearly 70 years. These puppets would be bigger in size, lighter in weight, more stylised and meant for a larger stage.

Which stories and plots do you deal with in your presentations?

Most of my productions are based on mythology like the Ramayana and the Mahabharata. So far, I have developed 20 plays by incorporating nearly 300 characters. I also have designed plays based on social issues like family planning, which are primarily for public awareness programmes of the government. 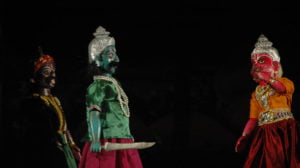 Puppetry is a dying arts tradition. How do you see its future?

It pains me a lot when people say that my art as dying. People belonging to all generations, both in rural and urban areas, love watching our performances. I was invited to stage a show at IIT, Mumbai. The young people there thoroughly enjoyed our show.

However, like many attractive art forms of our country, puppetry is not getting the patronage it deserves. As a result, it is rapidly getting marginalised. We do not get enough opportunities to perform and sustain ourselves to carry it as a profession. Most of my disciples, including my two sons, have discontinued it as a profession and switched over to other vocations for their survival. If this apathy towards our arts traditions continues, we would lose our precious heritage.

Would you prescribe a solution to the crisis?

Puppetry is the one of most ancient art forms of the world. It has survived for centuries with love and patronage of the people. We need to modernize our productions to suit the changing tastes and time. There should also be adequate stage shows for puppetry to help its practitioners survive. But the required support from the people and the government is missing.

Do you repent being a puppetry artiste?

No. I got into puppetry as I loved it. I took it up as my profession and a mission later on as I didn’t want it to die with the death of its last traditional master who was my guru. After all, rod-puppetry belongs to my homeland of Keonjhar.

However, it pains me that such a precious arts form is left to fend for itself. It is an irony that I was honoured with the Akademi Award by the Union government, but I was not even considered for the artistes’ pension. How would an artiste survive to serve the art?

Artistes were treated better under royal patronage. The kings used to offer landed properties to the artistes and scholars for their economic security. But governments now present reward us with certificates and medals. The royal families were real ‘rasikas’ who knew how to respect art and artistes. But, nowadays, we are required to apply for a mere pension from the government even after getting the highest honour of the nation.