Artists Showcase Their Creations On Hockey World Cup 2023 In Cuttack 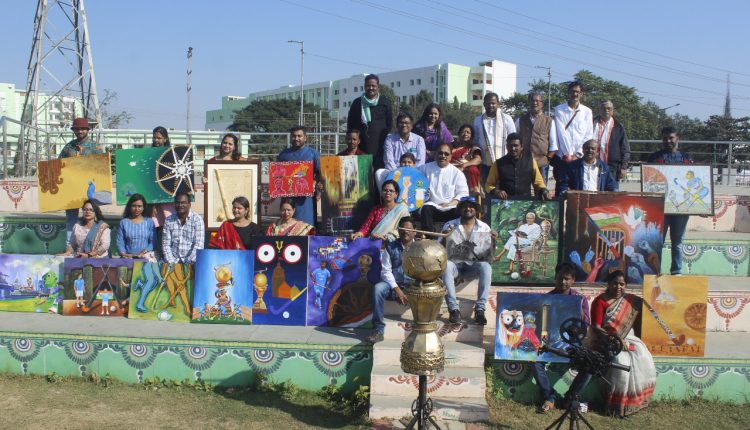 Cuttack: As Cuttack in Odisha geared up to host the opening ceremony of the FIH Men’s Hockey World Cup 2023 at Barabati Stadium on January 11, several artists showcased their creations on the international event at a workshop in the city on Sunday.

The artists created a fusion of Lord Jagannath & Hockey, Barabati Stadium & Hockey and Odisha Chief Minister & Hockey. Artist Sanjeev Biswal made a trophy and a celluloid camera made of scrap metals. An interior designer and architect, Biswal has completed his post-graduation in Fine Arts from JJ School of Art in Mumbai.

He spent 4-5 hours daily for the last seven days to come up with the showpieces. He used scrap metals like bicycle chains, bitumen drums, old locks, cranks of old motorcycles and spare parts of cars for his creations. He spent around Rs 10,000 from his own pocket. Deepak Biswal, a Smoke Art specialist, created a four-layer smoke art of Odisha government’s promotion of hockey.

The workshop, organised by Cuttack Artist Association at Gandhi Smaraki Park near Judicial Academy in Cuttack, was participated by around 50 artists from Cuttack and Bhubaneswar.

Inaugurating the workshop, chairman of OTDC Lenin Mohanty said he will try to ensure that more such workshops and exhibitions are organised during the Hockey World Cup. Promotion of Odisha art and culture would be stressed at these events where the artists can get opportunity to showcase their talent.

Now, BJP-BJD Spar Over ‘Missing’ Photo Of Odisha CM; Why No Invite For Prez, PM To Hockey WC, Ask LoP