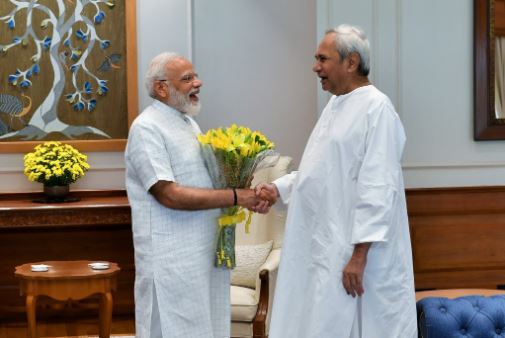 Bhubaneswar: The BJD’s decision on Friday to support BJP’s candidate and former bureaucrat Ashwini Vaishnav in the forthcoming Odisha Rajya Sabha byelections has brought to the fore a new political equation developing between the two parties, which bitterly fought the recently-concluded twin polls.

Chief Minister and BJD president Naveen Patnaik announced that his party would back Vaishnav, around 30 minutes after the national party declared him as its nominee. Party’s IT Cell Chairman and spokesperson Amar Patnaik and party spokesperson Sasmit Patra are it’s other two candidates.

Although the regional party has the numbers (112 out of 145 MLAs) in the state legislature to ensure victory in all three seats for which bypoll will be held, it clearly decided to go for Vaishnav.

BJD sources said Modi and Shah had requested Naveen to ensure Vaishnav’s win possibly because they want to have him in the central ministry.

Political analysts believe Naveen would have been left with little choice but entertain Modi and Shah’s request considering Odisha and BJD’s larger interests in view. This decision comes close on the heels of the BJD supporting BJP’s Om Birla for the Lok Sabha Speaker post.

While the growing proximity between the two rivals, who were allies from 1998 to 2009, has understandably become a talking point, the selection of Vaishnav, an Odisha cadre IAS officer who had served as deputy secretary in the PMO when A B Vajpayee was the PM at the turn of the millennium, is bound to make the BJD face some uncomfortable
questions.

An IIT alumnus, Vaishnav severed as collectors of Balasore and Cuttack districts before proceeding on central deputation. He was known to be a close aide of Vajpayee and even worked with him after he lost the 2004 polls.

When the BJD and the BJP were alliance partners, Vaishnav was said to be a key person in coordinating affairs between the two parties. Subsequently, he completed an MBA from the Wharton business school.

Political circles believe Modi could be planning to induct Vaishnav as a minister and hence would have requested Naveen to support his candidature.

However, this might not go down well with BJD aspirants and supporters as it would fuel discussions on the BJD and the BJP having a tacit deal.

State Congress president Niranjan Patnaik wasquick to attack the two parties on this, saying: “It was a drama being enacted by the BJD and the BJP. Both parties have a secret
understanding.”

BMC Gets New Commissioner In Major Bureaucratic Reshuffle In Odisha