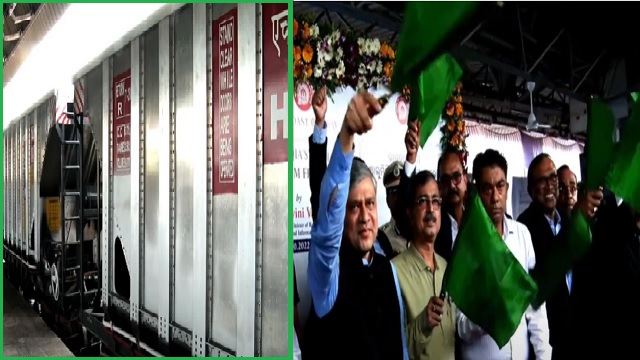 The aluminium rakes will promote the country’s ambitious plan to modernise freight transportation on a fast-track basis and will enable large carbon savings for the Railways.

Describing it as a significant milestone in the modernisation drive in mass transportation, the Minister said switching to aluminium will significantly reduce carbon footprint.

The railway rake made of aluminium will save 1,500 tonne of carbon emissions a year. A single rake can save over 14,500 tonne of CO2 in its lifetime.

This is a dedicated effort for Make in India program as it has been fully designed and developed indigenously in collaboration with RDSO, HINDALCO and Besco Wagon. The first rake’s destination is Bilaspur.

Speaking about the features of aluminium rake, Vaishnaw said it involves fully lockbolted construction with no welding on superstructure.

While the tare is 3.25 tons lower than normal steel rakes, it has 180 ton extra carrying capacity resulting in higher throughput per wagon. Payload to tare ratio is 2.85, said an official.

The reduced tare will reduce carbon footprint as lower consumption of fuel in empty direction and more transport of freight in loaded condition. A single rake can save over 14,500 tonnes of CO2 over its lifetime.

Another advantage is 80 per cent resale value of the rakes, while the cost is 35 per cent higher as the superstructure is all aluminium.

The maintenance cost for the aluminium rake is much lower due to higher corrosion and abrasion resistance.

Iron industry consumes a lot of Nickel and Cadmium which comes from import. So, proliferation of Aluminum wagons will result in less import. At the same time, this is good for local aluminum industry.