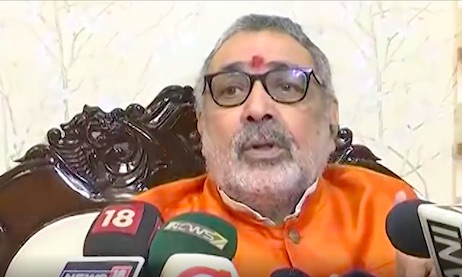 Bhubaneswar: The Odisha government has again come under fire for alleged irregularities in the implementation of Pradhan Mantri Awas Yojana- Gramin (PMAY-G), a flagship scheme of the Narendra Modi government.

Speaking to the media here on Thursday, Union Rural Development and Panchayati Raj Minister Giriraj Singh said that there is no transparency in the allocation of PMAY houses in the state. “Actual beneficiaries have been deprived and 37 per cent of cyclone-hit victims are yet to get houses,” he said after a meeting with Union Education Minister Dharmendra Pradhan and State Panchayati Raj Minister Pradip Amat.

He stressed that only the PMAY logo should be used on houses granted to beneficiaries under this scheme. “The State Minister should discuss all issues with the CM. Approval for pending 8 lakh houses will be given after CM assures of transparency. There can be no compromise for genuine beneficiaries,” he added.

In December 2021, Chief Minister Naveen Patnaik had written to Prime Minister Narendra Modi seeking 1.84 lakh houses for cyclone Fani-affected families and 13 lakh houses for others from tribal and Koraput-Balangir-Kalahandi (KBK) districts.  Following this, the Centre decided to allocate an additional eight lakh houses to Odisha under the scheme.

“We had a discussion on how landless and homeless people would get a house. In a joint effort, both central and state governments are working towards providing houses to the genuine poor beneficiaries,” said Amat.

Earlier last year, the Odisha unit of the BJP demanded a Central Bureau of Investigation (CBI) inquiry into alleged irregularities and corruption up to Rs 1,000 crore and immediate removal of logos of the Biju Pucca Ghar Yojna (BPGY) from the houses of beneficiaries.

The Union Rural Development Secretary had also written to the government, stating that the contribution from state resources is a commitment by it for implementation of the centrally-sponsored scheme and it does not confer the rights for use of any other logo other than PMAY-G.

On the other hand, the BJD has alleged stepmotherly treatment to Odisha in allocation of houses under this sheme for the past three years. The party MPs also raised the issue in Rajya Sabha in February this year and said that the tribal people are being affected by the denial to add 6.65 lakh houses on the Awaas Plus portal.