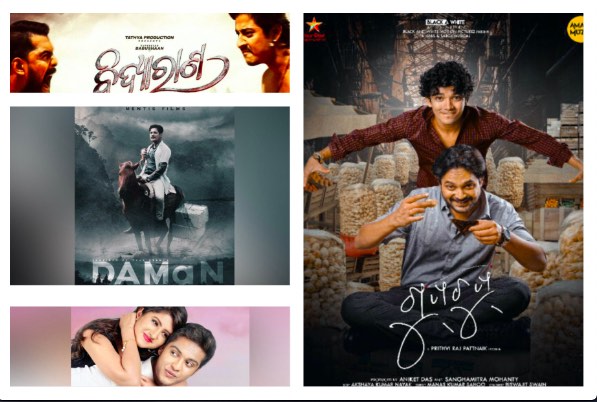 Bhubaneswar: Moviegoers in Odisha, soaking in Raja festivities, have all the more reasons to head back to cinema halls with six Odia films lined up for release – ‘Gupchup’, ‘Bidyaran’, ‘Dil Mora Manena’, ‘Biswanath’, ‘Premam’ and ‘Daman’.

A rom-com, the story revolves around the protagonist, played by Amlan Das, and his 3 phases of Love. Sunmeera Nagesh, Sailendra Samantray, Ananya Mishra, Arosikha Mishra, Himagni Dutta, Papu Pom Pom, Mihir Das, Bunty R Samal and Santu Nije essay other important roles in the film. This is also the last shot project of veteran actor Mihir Das, who passed away on January 11. The movie with a layered screenplay has been directed by Prithvi Raj Patnaik.

Produced under the banner of ‘Black And White Motion Pictures’, it has music by Nabs and Saroj, lyrics by Arun Mantri, Tapu Nayak, Aptakam Rath and Debdas Chhotray.

The movie was released on June 10.

The most-awaited film of superstar Babushaan Mohanty, ‘Bidyaran’, in which the actor has undergone body transformation will also see a Raja release. He has been paired opposite Sivani Sangeeta, their second film after ‘Sister Sridevi’.

The shooting of this Joyte Das- directorial was delayed due to the COVID pandemic. The film has been produced by  Pradeepta Prakash Acharya and Niranjan Nayak.

‘Dil Mora Manena’ starring Swaraj Barik and Sivani Sangeeta is a musical love story. Like ‘Bidyaran’, this movie, the shooting for which began in 2017, has long been waiting for its big release. The star cast also includes late veterans Mihir Das and Salil Mitra.

Directed by veteran director Chandi Parija, the film has been produced by Bapuni Kumar under the banner ‘Maa Tarini Entertainment’ and Chhabitaand Sridhar Martha under the ‘RRC banner’. Producer Sridhar Martha is also essaying a negative role in the movie. The music has been composed by Prem Anand and the choreography is by Lubun-Tubun.

The movie was released on June 10.

The fight of a common man with the whole world for his family is the theme of this film, which promises a lot of action, romance and family drama. It is reportedly a remake of the Telugu movie ‘Mirchi’ and the Bengali movie ‘Bindaas’. The film has Sambit Acharya and Sambhabana in the lead roles with Mihir Das, Raimohan, Pruthviraj, Manisha Mishra and Ananya Mishra playing important characters.

Premam is a story about Sanju and Padmini played by Babushaan and Prakruti Mishra. The duo was last seen together in Prashant Nanda’s ‘Thukool.’ Siddhanta Mohapatra as Babu Rao also plays an important character in the film.

“Earlier, I have done romantic and comic roles. But, this is a thriller,” said Babushaan.

Directed by Tapas Sargharia, the film has been produced by Sisir Kumar Sarangi under Emoji Films in association with Babushaan Films. Amara Muzik is the official promotion partner of the film. The music is by Gaurav Anand.

Besides theatrical release, the film will be streamed on Disney Hotstar.

Babushaan Mohanty will be seen essaying the role of a doctor working in the Maoist-hit Malkangiri district of Odisha in this movie based on a true story. “The first important thing about this project, which attracted me, is that it is about helping others. I could connect myself with the emotions involved in the story,” the actor had earlier told Odisha Bytes.

Dipanwit Mohapatra is also playing a lead role in the film produced by Deependra Samal under the banner J P Motion Pictures and directed by Vishal Mourya and Debiprasad Lenka.

The trailer of the movie has already created a buzz on social media. It was set for June 10 release, but the makers have postponed it to July.