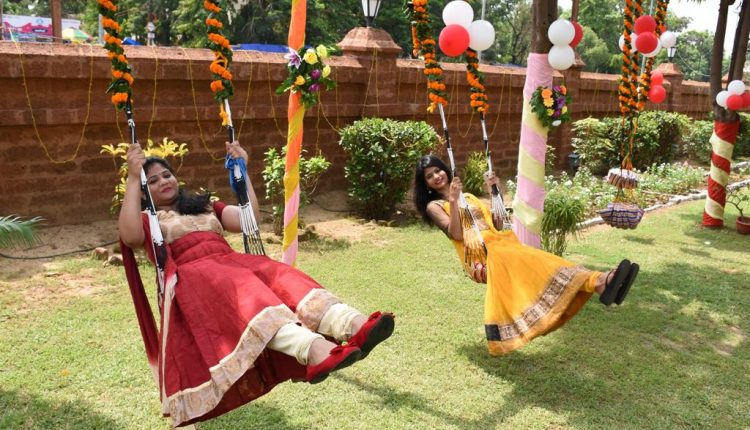 After two years of subdued celebrations, Odisha is celebrating Raja with full aplomb. Needless to say, there is an air of festivity all around with decked up markets and sweet shops doing brisk business.

A unique festival to celebrate menstruation and female productivity. Raja can be termed as the short form of the word Rajaswala, which means a menstruating woman.

The belief is that mother earth menstruates just like women do and menstruation symbolises fertility and creativity. The other angle is that earth is most fertile during this period and it is the best time for the germination of seeds. So, in that sense, Raja also symbolises the sowing season.

Seen from the feminist lens, Raja is both progressive and regressive. The festival ought to be acknowledged for its exclusivity in that it celebrates womanhood and normalises menstruation. Sadly, the conversation around it is missing and it has become more of a celebration minus the ‘talk of periods.’

Adults in most families have not taken the pain to explain to their girls the significance of the festival, choosing to shroud it under the garb of merry-making, gifts, good food and riddance from work. The conversation around periods in the four walls of a house is still absent or in hushed tones. In other words, periods are still not ‘acknowledged’ in daily life and even if they are, there is still a lot of stigmas attached like not entering the kitchen and not leaving the hair untied.

“I just have an inkling about the festival and that it has something to do with the monthly cycle, that too now. Beyond that, it has just meant gifts, gifts and more gifts for the most part of my childhood,” says Swayanka Mohanty, a final year student at Noida’s Amity University.

Almost on the same page but with more radical views is Ipshita Kumar, head of NFT marketing at Germany-based HYPE, “Even as a native Odia, I did not know about Raja Parba in its full transparency until I just read about it. I had vaguely heard about Raja being celebrated in the family. All I knew was that unmarried girls get gifts. That’s the kind of education we Odias have provided to our future generation. Even we don’t know about the festival. The fact that it has died down within Odia families shows that we didn’t take the concept to the rest of the country. I do feel it is very regressive in the times that we are now, that we need to have special movements about normalising periods or we need to have cultural references when a whole state celebrates menstruation.”

Bijoya Mohanty, Wellness Entrepreneur and co-founder of ASHA Experience, is also very emphatic. “There is no point in discussing the cultural aspect if we can’t relate it to daily life. How can you talk about normalising periods when even in this day and age, women are expected to conceal sanitary napkins in black polythene bags? And the boys and men in the family still don’t talk about periods with their wives, daughters and sisters?” she asks.

The catch lies in the subtle way of glorifying womanhood and motherhood and reinforcing patriarchy through cultural roots instead of normalising menstruation. Rukmini Panda, Program Officer, Gender Justice at Oxfam India had rightly written in a 2020 article. “The festival, while can be credited with celebrating menstruating women/earth, it in its own subtle way reinforced and glorified the social norm of not allowing menstruating woman/girls to participate in household chores especially entering the kitchen.

“The society with its very strong, deep-rooted patriarchal foundations has been obsessed with the virginity of girls. We as a society have never supported our girls to manage menstruation with dignity and take pride for the creativity it symbolises. It is time we break this taboo and celebrate Raja festival in its true spirit by accepting periods as a normal biological process and not discriminating girls/women for having them,” she added.

Also Read: There’s Another Festival Like Odisha’s Raja Parba; Know More About It