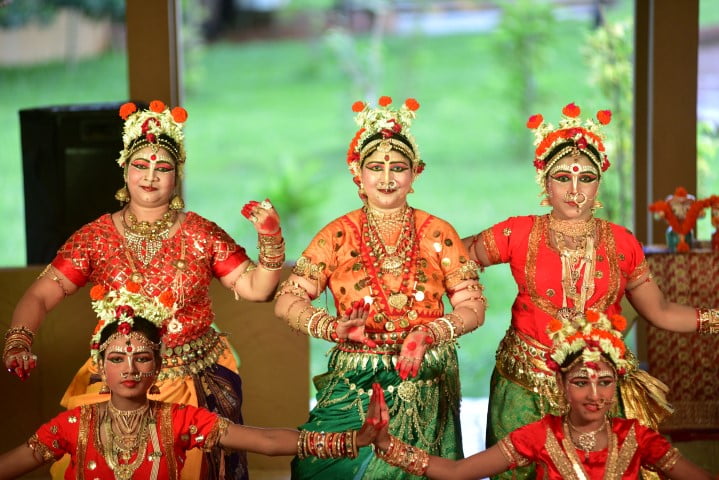 Bhubaneswar: The ‘human consort’ of Lord Jagannath may now be the thing of the past, but Maharis or Devadasis continue to live in a beautiful Odissi form and the Odisha capital got a chance to immerse in its beauty on Sunday.

Celebrated dancer Rupashree Mohapatra, who has kept the Mahari form alive, performed at Odisha Crafts Museum during the Museum Walk here. She also highlighted the role of Maharis during Rath Yatra on the occasion.

“Five days after Lord Jagannath, Lord Balabhadra and Devi Subhadra arrive at Gundicha Temple for the annual sojourn, Goddess Laxmi accompanied by a group of Devadasis try to persuade the Lord to come back, on Hera Panchami,” she said.

To keep this tradition alive, the danseuse is planning a performance on Hera Pachami, which falls on July 18 this year.

At the museum, Rupashree’s troupe started the performance with ‘Mangalacharan’, followed by ‘Sita Kamala’. Devotion to the Lord expressed through subtle mudras, graceful movements and deft footwork, especially during the mystic ‘Laxmi Strotam’, left the audience spellbound.

Mahari dance originated in the Jagannath Temple in Puri as a ritual dance for the deities.

There is mention of six categories of women who performed different types of services for the deity of Puri — bhitara gaoni, bahara gaoni, nachuni, patuari, raja angila and gahana mahari. Of them, only two, bhitara gaoni and bahara gaoni survived up to the mid-20th century. There is a ‘Record of Rights’ of 1952 pertaining to the Jagannath Temple, which provides information on nine incumbent Maharis of the time.

No Sale Of Marine Fish In Bhubaneswar For 10 Days

VickTrina Wedding: Families Head For Rajasthan; Know Who Is In Charge Of Security At…

AAC to open with performances on Kalinga War, Konark