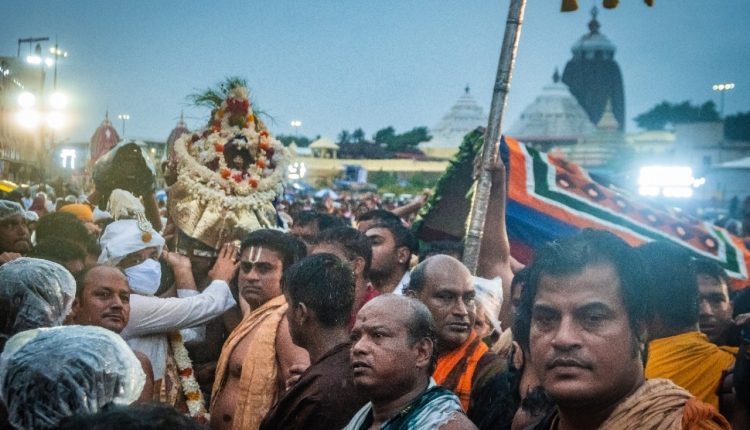 Puri: The Bahuda Yatra of Lord Jagannath, Devi Subhadra and Lord Balabhadra ended with arrival of their chariots at Srimandir, here on Tuesday.

Marking the end of their annual sojourn to aunt’s place at Gundicha Temple, the deities were brought to their colourfully decorated chariots in ‘Pahandi’ (procession). The ritual was completed ahead of schedule.

Puri king Gajapati Dibyasingha Deb performed the Chhera Panhara (sweeping the chariots with golden broom) on three chariots. The process was completed by 1 pm and then pulling of the chariots began.

Several rituals were performed on the way while the servitors pulled the three chariots on the Bada Danda (Grand Road) amid heavy rain. After the chariots of Lord Balabhadra and Devi Subhadra arrived at the temple, the ritual of Laxmi Narayan Bheta was performed.

As per the tradition, Lord Jagannath was made to wait on chariot by Goddess Laxmi for not taking her to the aunt’s house. To diffuse the tension, Gajapati Dibyasingha Deb intervened and escorted Goddess Laxmi to the Nandighosha chariot where the divine meeting took place.

For the second year, the festival missed the participation of devotees due to COVID-19 pandemic. The district administration had clamped curfew in the town and made elaborate security preparations for the smooth conduct of the festival.