Balasore Mechanic Dreams Of Soaring High, Makes His Own Helicopter 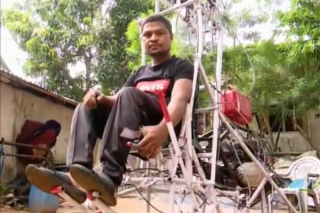 Balasore: A young cycle mechanic of Balasore has realised his life’s ambition by making a helicopter. Although Mosim Khan has made the helicopter using his life’s savings, it cannot fly yet.

“I have used the engine of a bullet and parts of old vehicles and cycles to make the helicopter,” said Mosim.

This hand-made helicopter will be able to fly up to 60 to 70 km with one litre petrol, he added.

“I have spent Rs 1.5 lakh for making this helicopter. I need another Rs 1.5 lakh to complete the work,” informed Mosim.

Mosim is undeterred. “I will complete my work in the coming three months and the helicopter will then fly in the sky,” said Mosim.

However, it is still not known whether the administration will give permission to him to fly the helicopter.

Earlier, he had made a mini aeroplane and went to Rasagobindapur aerodrome for its operation. But he could not fly it due to police restrictions.

Mosim has spent the last 10 years in planning and executing the work to make this helicopter.