Bargarh Adorned As Mathurapuri, All Set For 11-Day Dhanu Jatra 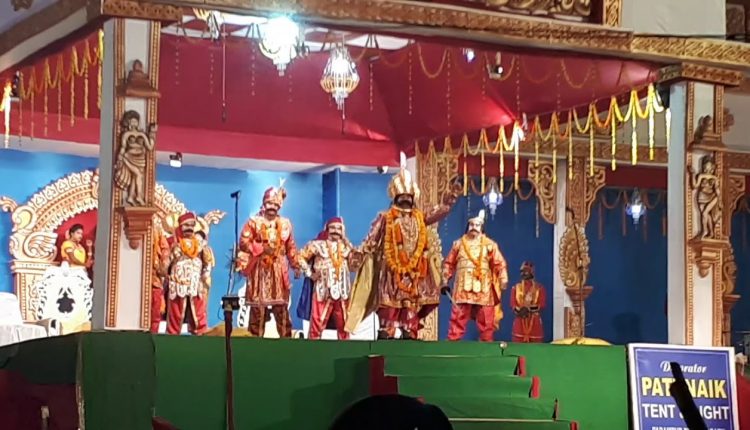 Being adorned as Mathurapuri, the capital city of king Kansa, for 11 days, the town will witness a 120 feet high and 70 feet wide Raj Darbar (Royal Court) for king Kansa who will conduct his Raj Durbar for seven days. Similarly, Ambapalli which has been decorated as Gopapura will be the home to Lord Krishna during his childhood days.

Besides, a Rangamahal has also been constructed for the actors to entertain the spectators. In line with the central theme ‘Krishna Leela and Mathura Vijay’, the day one will begin with the wedding of king Kansa’s sister Devaki with Basudev and will conclude with the ‘Kansa Badha’ at the hands of Lord Krishna.

However, there will be only one elephant instead of two for the royal entourage of the demon king. It is the time when ‘King Kansa’ virtually rules the town, unleashes terror on his subject and impose fines on the offenders. The money collected through fines goes into the Dhanu Jatra Mahotsav Committee Fund.

This year, the committee could arrange only a single trained elephant from Assam which will be used by King Kansa. His ministers will ride camels and horses instead.

The actors, including  Bhubaneswar Pradhan, who plays King Kansa, are busy rehearsing their parts for the one last time. “We are eagerly waiting to climb onto the stage and show our acting skills,” said Pradhan.

Director of the play Panchanan Birtia is happy with the preparations for the play. “The artistes will perform well as they are fully prepared,” he said.

Bargarh Collector Jyotiranjan Pradhan said that the preparations are almost complete. “We are ready to welcome everyone to witness world’s largest open air play here,” he added.

The 11-day festival will showcase ‘Balya Leela’ of Lord Krishna in Gopapur including Vastra Haran, Kalia Dalan, killing of devils such as Putuna, Sakata, Truna, Baka and Dhenu,  and cruelty of the demon king Kansa in Mathura.

The festival is being held in Bargarh since 1947. This time it’s going to get livelier with the participation of about 3,000 artistes representing 120 cultural troupes from across the country.