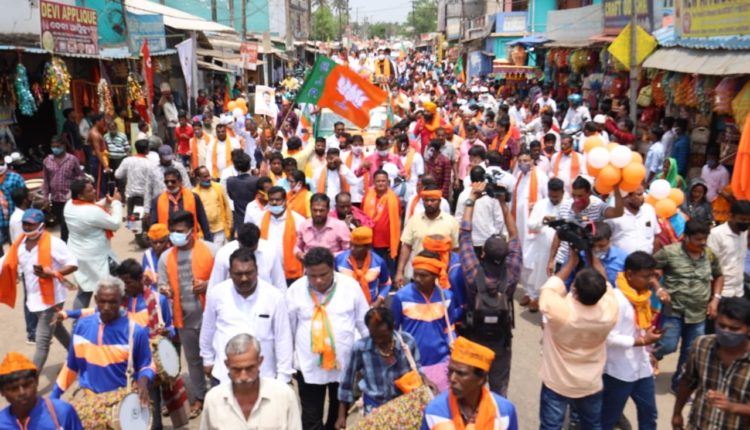 Bhubaneswar: Pipili assembly constituency is witnessing an intense fight between the ruling BJD and the BJP ahead of the April 17 byelection. Pre-poll violence as well as allegations and counter-allegations have raised the battle pitch.

During his virtual rally on Monday, Naveen promised the electorate to personally look after the development of Pipili-Delanga.

At a press briefing, Samir said, “I would like to question the BJD supremo as to ‘who was responsible for the development of the constituency before the bypoll dates were announced.” Notably, BJD’s Pradeep Maharathy won seven of the last eight elections in Pipili.

His second question pertained to violence in Pipili. He said that this was the primary reason for the loss in business of the appliqué artisans.

Referring to the sensational murder case of Itishree (in Rayagada) and Bebina that rocked the state in recent years, the BJP state chief asked how could the CM forget about them while talking about woman empowerment in Pipili.

The BJD president had made a special appeal to women to come out in large numbers and exercise their franchise. “The mothers of Odisha are leading several projects under Mission Shakti. This is a major achievement in the direction of women empowerment which the party has always stood for,” Naveen said.

Samir also questioned the deplorable state of cylone Fani-hit Pipili residents, who are still forced to live under the open sky despite funds being released by the Centre for their rehabilitation.

Describing Dhirendra Samantray and Priyabrata Samantray, who are campaigning for the BJD candidate Rudra Pratap Maharathy in Pipili, as “history-sheeters”, he asked, “Is the CM encouraging violence in this election.”

The BJD, on its part, responded, saying that the BJP is expressing its frustration, being fully aware of its impending defeat in the bypoll, through such press conferences.

“The saffron party takes to these stunts – holding press meets and approaching the Election Commission – before every election. They had taken the same route during the 2014 and 2019 elections but to no avail,” said BJD spokesperson Sasmit Patra.

He alleged that the BJP was known for using money and muscle power during elections and this came to the fore when Rs 50 lakh was seized from two alleged workers of the party in Pilili.

“Since people of Odisha are not ready to accept them, they try to capture some space in their minds through such pressers. The electorate of Pipili is aware of these ploys and have decided to defeat BJP again in the bypoll,” he maintained.

DIG To Probe Alleged Custodial Torture Of Youths In…