Bhubaneswar, Cuttack Go Down Under Rainwater 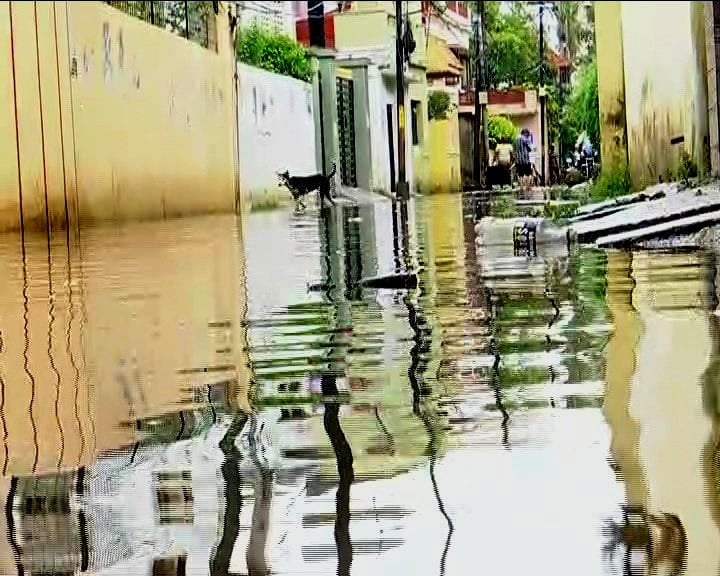 Bhubaneswar/Cuttack: Several areas in Bhubaneswar and Cuttack have been flooded following two days of heavy rainfall, leaving residents of the twin cities in miserable condition.

Life in the smart city of Bhubaneswar was disrupted due to severe water-logging. Commuters on city streets had a torrid time while passing through knee-deep water at Acharya Vihar, Jayadev Vihar, Rasulgarh and Palasuni squares on the National Highway. There was heavy traffic jam near the Iskcon temple at Nayapally with hundreds of vehicles stranded on the road. Even two-wheeler drivers found it impossible to negotiate the waist-deep water on the road. Rainwater also flooded the flyover between Jayadev Vihar and Acharya Vihar.

Besides, rainwater entered the houses in Dumduma Housing Board Colonies, Behera Sahi and Laxmisagar areas in the city due to water-logging.

Talking to Odisha Bytes, Bibhuti Das of Nayapalli area said that the Bhubaneswar Municipal Corporation (BMC) had prepared a blueprint for repairing the 22 existing drains after the city was flooded with rainwater in 2018. “The former BMC Mayor, Anant Narayan Jena, had told the media that for the repair work of these drains, the state government has sanctioned Rs 17 crore in the first phase. In the meantime, a year has passed and the BMC Mayor has become the MLA, but what is the status of the drain repair work?” Das asked.

Talking to the media, Cuttack Municipal Corporation (CMC) Commissioner Ananya Das said a high-powered JAICA water pump has been pressed into service near Matru Bhawan to flush out stagnant water. Besides, another high-powered pump has been put up in Khan Nagar area. “We are also planning to hire more submersible pumps from the Fire Services department to discharge the rainwater from the remaining low-lying areas in the city,” she added.