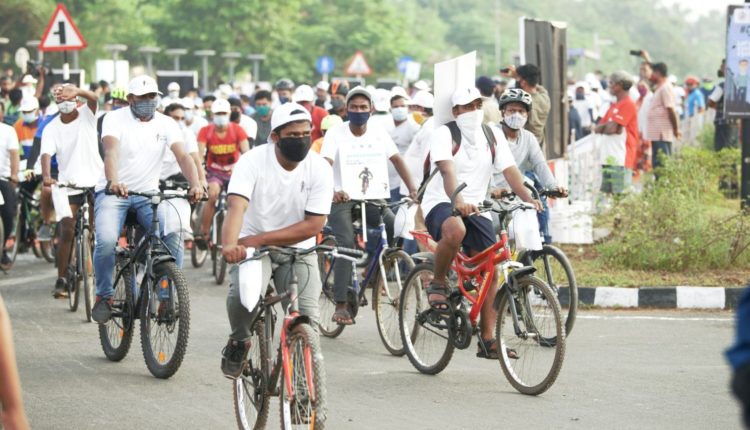 Bhubaneswar: Around one thousand cycling enthusiasts from the smart city on Friday thronged the Shishu Bhavan square to take on the ‘Cycles4Change’ challenge, a joint initiative of the Bhubaneswar Municipal Corporation (BMC) and the Bhubaneswar Smart City Limited (BSCL).

The event was organised to promote cycling as a public transport means in the city. As a part of the initiative, cyclists from different parts of the city took part in the event – ‘Cyclegiri-Cycles4Change’ and pedalled from Sishubhavan square to Dhauli, a stretch of around 12 km.

Bhubaneswar was one of the 95 cities in India to have registered for the India Cycles4Change Challenge, which is an initiative of Smart Cities Mission of the Union Housing and Urban Affairs Ministry to promote cycling. BMC Commissioner Prem Chandra Choudhury who was present in the event said that the initiative was aimed to boost the habit of cycling among the denizens.

Several citizens took a pledge to use cycles at least every Friday. A Cyclegiri anthem was also launched.