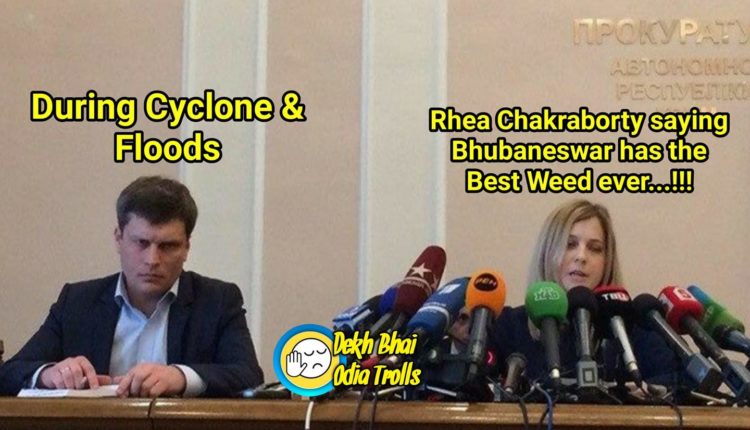 Bhubaneswar: No sooner the Odisha capital made an entry in the Sushant Singh Rajput case than it became the talk of the Twitter meme world.

Few netizens were seen comparing media coverage during cyclones in Odisha through their memes while others suggested geographical indication tags of weeds from the city.

According to Rhea’s WhatsApp chat messages, accessed by Times Now — the actress reportedly told friend Simone Khambatta, “Dude, Bhubaneswar is the scene” and best weed are available in the city.

Rhea had reportedly visited Bhubaneswar during the IPL promotion in the city.

A lot of folks started to pour in tweets that will tickle your funny bone. Let’s take a look:

#Bhubaneswar has the best weed..
Well one of the best promo & totally high effects of it..?? pic.twitter.com/nHinCZ5HWr

Rhea – Bhubaneswar has the best weed !

After Rhea Chakraborty saying that Bhubaneswar has the best Weed Ever…

And they said Bhubaneswar is the scene…!!! https://t.co/Y4Wau5hPjN

Before you ask, let me say I am feeling a curious mix of pride and shame from this piece of our cable news. #Bhubaneswar #bestweedeverhttps://t.co/B68SLDpMbs

#Bhubaneswar was the best kept secret that Reha exposed.

Now it will never be the same again.

As its in the out now, below is the weed fields of Bhubaneswar. ?? pic.twitter.com/A3ZLHIbnnw

After first time ever #Bhubaneswar is trending..
Every people of #Bhubaneswar be like pic.twitter.com/ItZpuIfcp1

Rhea Chakraborty says : "Bhubaneswar is the scene! Best weed ever!"