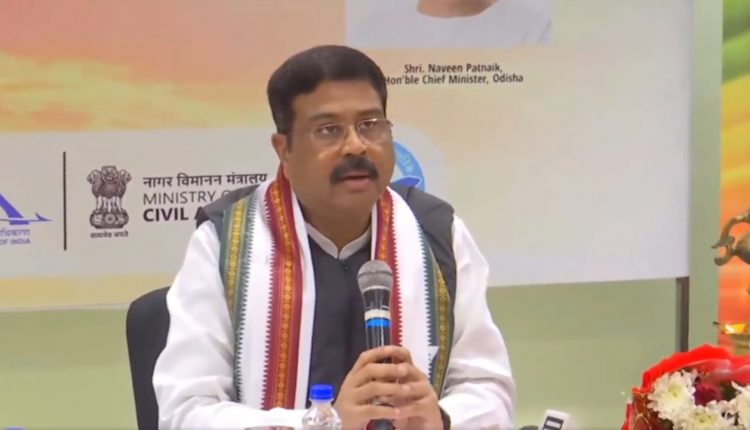 Bhubaneswar: Hitting out at Odisha’s BJD government for its attitude towards the Centre, Union Minister Dharmendra Pradhan on Saturday claimed accused it of denying due credit to Prime Minister Narendra Modi during major events and for state’s development.

The senior BJP leader lashed out at the state government for excluding the Prime Minister’s picture from the posters, banners and advertisements for major events including the inauguration of the commercial flight service between Bhubaneswar and Rourkela.

Noting that Modi had invoked Cuttack Bali Jatra from Indonesia, he said the state government did not even thank the Prime Minister.

“It is unfortunate that Modi Ji’s picture was excluded..  We all should unite when it comes to Odisha’s interest despite political differences,” the Union Education Minister said after inauguration of the maiden Bhubaneswar-Rourkela flight.

Stressing that the Prime Minister has been instrumental in launching many initiatives for the development of Odisha, Dharmendra said unfortunately the state government completely ignored his role.

The state government failed to show any sign of acknowledgement in recent events including the inauguration of Birsa Munda Hockey Stadium in Rourkela and commencement of the Bhubaneswar-Rourkela flight on Saturday as part of the UDAN scheme or inauguration of the Deloitte Centre in Bhubaneswar, he alleged.

In his reaction, Odisha’s Science and Technology Minister Ashok Panda said India has a federal system of government and Odisha has equal share in operation of the flight service as the Centre has.

Accusing the Odisha government of making little effort to thank the Prime Minister and the role of the Centre, Dharmendra claimed there was no poster or banner of PM Narendra Modi in any of the major events.

This is not expected from Odisha. The ruling BJD should consider this and acknowledge the Centre’s role in whatever success the State is reaping now,” Pradhan said.

Speaking in same vein, senior BJP leader and Bhubaneswar MP Aparajita Sarangi said the Centre has contributed funds but unfortunately there is no picture of the Prime Minister in any of the hoardings and advertisements.

PM 2.5 Pollutant In Delhi Is 100 Times The Safe Limit Set By WHO