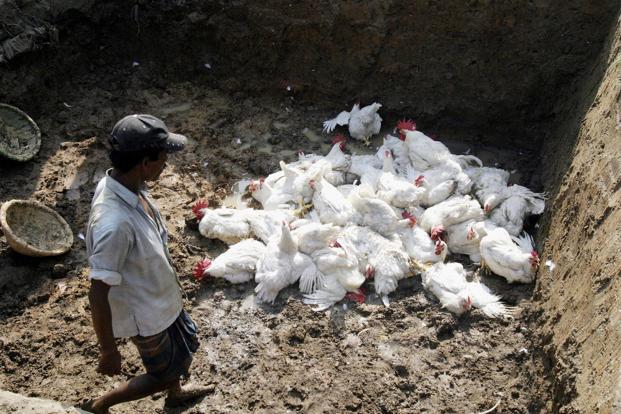 Bhubaneswar: A day after confirmation of bird flu in Odisha University of Agriculture Technology’s (OUAT) research poultry farm, the Animal Resources Department on Tuesday began culling of chickens on its campus and within 1 km radius of the university.

According to reports, the culling began by a special team under the direct supervision of the Chief District Veterinary Officer (CDVO), Khurda, in presence of the senior officials of the Animal Resources and Revenue departments.

The Animal Resources Department has formed 12 Rapid Response Team (RRTs) of which seven teams will be engaged in culling while five teams will conduct a door-to-door survey and advise the people to allow the culling of the chickens they have kept in their home.

The department officials said culling of chickens is being done in accordance with standard operating procedures. After culling, the chickens will be dumped inside a 12-feet pit with lime and bleaching power to prevent the spread of the virus to the nearby areas.

The department has banned the sale of chicken eggs and meat in any counter in 1 km radius of OUAT.

Confirming cases of bird flu, head of the Department of Pathology, OUAT, Sushen Panda, on Monday had told the media that following the death of chickens in the research farm in the last 2-3 days, the blood and excreta samples of the chickens were sent to the High Security Animal Disease Laboratory (HSADL) in Bhopal. The report received from the laboratory had confirmed the presence of H1N1 (influenza virus).

Meanwhile, the Forest officials of the Chilika Wildlife Division and the Animal Resources Department, Balugan, collected the stool samples of some migratory birds from the Nalabana area of the lake on Tuesday. They said that the samples will be sent to the HSADL in Bhopal for the test.