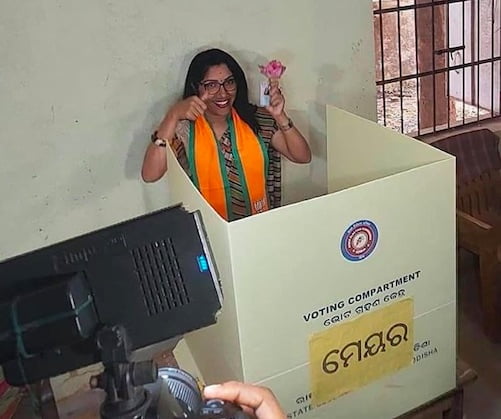 Bhubaneswar: After the fake doctoral degree expose, BJP candidate for Bhubaneswar Mayor Suniti Mund has courted another controversy by allegedly flouting the model code of conduct during the urban polls being held in Odisha after a gap of nine years.

Suniti was clicked holding a ‘Lotus’, her party symbol, while casting vote at Jharpada High School here on Thursday.

State Election Commission (SEC) secretary Rabi Narayan Sahu said carrying party symbols to polling booths was a violation of the poll code of conduct. “I have seen that while being telecast on news channels. No parties have so far come forward with a complaint against her,” he told Odisha Bytes.

Ranjan Mohanty of Election Watch told Odisha Bytes that candidates are barred from engaging in any kind of campaigning within 100 metres of polling booths. Referring to an earlier incident, he said elections officers were once asked to cover party symbols at a polling booth following a complaint by Congress leader Rahul Gandhi.

BJD spokesperson Lenin Mohanty said this was not expected from a supposedly well-educated mayor candidate of Bhubaneswar. “This tantamounts to gross violation of the model code of conduct. We would lodge a complaint with the SEC once the polling gets over,” he said.

Lenin further said the BJP has been instigating violence at different booths in Bhubaneswar but blaming the BJD for it. “They are deliberately violating the poll code and also indulging in violence,” he claimed.

Odisha Bytes tried to contact Suniti for her version on the incident, but the calls went unattended.

BJP spokesperson Golak Mohapatra expressed ignorance over the incident but accepted that it was a violation of the poll code of conduct.