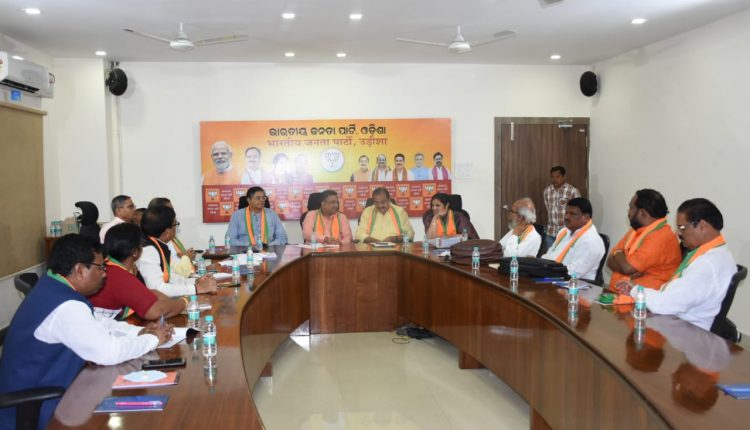 Bhubaneswar: BJP’s newly-appointed Odisha in-charge Sunil Bansal on Tuesday held parleys with senior state leaders about strategies to bolster the party’s prospects in the 2024 elections with a proper roadmap.

Bansal, who arrived in Bhubaneswar on Monday on his maiden visit to the state after becoming BJP’s Odisha prabhari, emphasised the need to galvanise the party organisation at the grassroots through regular interactions with the people, party sources said.

“While the focus was on fine-tuning strategies to brighten the poll prospects, a roadmap was prepared for the coming three months,” state BJP general secretary Golak Mohapatra told mediapersons.

He said a blueprint was prepared at the core committee meeting chaired by Bansal, who played a key role in BJP’s electoral victory in Uttar Pradesh.

“While a training programme is to be held in Puri from September 13 to 15, the party will work towards further strengthening the organisation at the grassroots,” he said, adding that leaders will meet the common people to understand the problems they are facing.

Bansal, a national general secretary of BJP, is also holding a meeting with party MPs, MLAs and district presidents to take stock of the situation and inform them about the necessity to gear up for the next Lok Sabha and state Assembly elections.

The saffron party is set to see a flurry of activities this month with BJP national President J P Nadda arriving in Odisha on a two-day visit on September 29. National general secretary (Organisation) B L Santosh is also scheduled to visit the state later this month.

These back-to-back visits have come close on the heels of Amit Shah, the BJP’s chief strategist, August 8 call to renew efforts to dislodge BJD in Odisha. A couple of days later, Bansal was appointed as in-charge of the Odisha unit of the party, purportedly to strengthen the party apparatus in the state ahead of the polls.

With Odisha being a focused state for central leadership ahead of the 2024 elections, Nadda is also expected to hold meetings with MPs, MLAs and senior party leaders to plan a strategy to achieve Mission 120+.