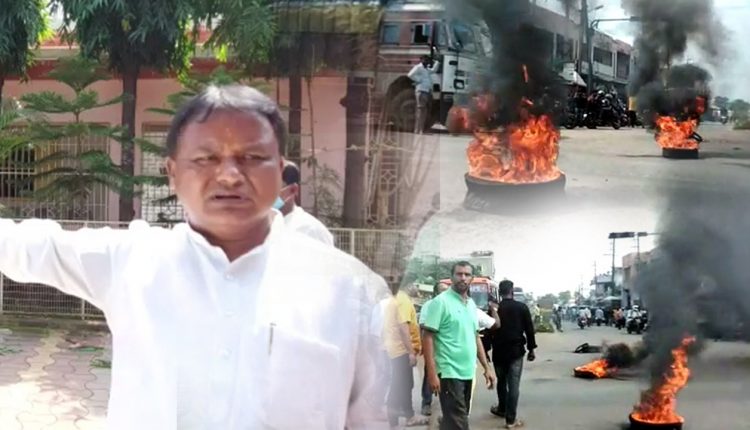 Keonjhar: In the wake of bomb attack on the vehicle of Keonjhar legislator Mohan Charan Majhi (BJP), activists of Bharatiya Janata Party on Sunday held up traffic in Keonjhar town causing inconvenience to the commuters.

According to sources, the legislator was returning from a meeting along with his two security persons when two motorcyclists hurled a bomb in front of his car.  When the MLA’s guards and driver came out of the car, the miscreants hurled another bomb and sped away towards Naranpur railway station.

The MLA, however, has filed a complaint with Keonjhar Town police. The legilator has alleged that the attack might have been the handiwork of Biju Janata Dal Youth Vice-President Saumya Shankar Chakra (Raja Chakra).

Subsequently, the town Police have reached the spot and intensified screening of vehicles at all checkpoints to nab the accused.

Meanwhile, angered by the attack, BJP workers have staged a rasta-roko at Gandhi junction on National Highway 49 and demanded action against the culprits at the earliest.

According to BJP District Yuva Morcha general secretary Akshay Kumar Maharana, some miscreants at the behest of BJD leaders attacked the BJP legislator and the impromptu Rasta-Roko is intended to draw the attention of the police and to demand the arrest of the accused at the earliest.

The road-blockade was, however, lifted on the assurance of Keonjhar Superintendent of Police Mitrabhanu Mohapatra that the culprits would be brought to book within 24 hours.

Low Pressure Likely To Form Over North Andaman Sea In 36 Hours; What Is In Store For Odisha