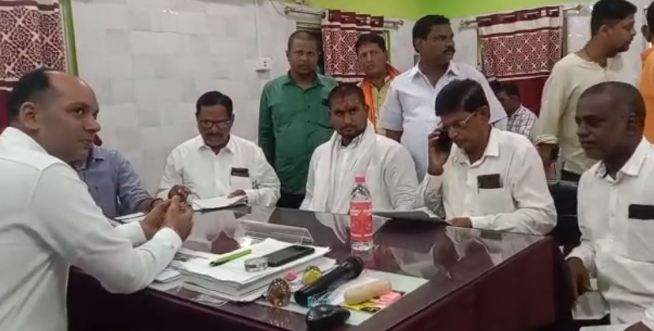 Bhadrak: BJP candidate Suryabanshi Suraj on Tuesday filed his nomination for the by-election to Dhamnangar Assembly constituency in Odisha’s Bhadrak district scheduled to be held on November 3.

BJP state president Samir Mohanty, Leader of Opposition Jayanarayan Mishra and a host of senior party leaders accompanied Suraj when he filed his papers at the Collector’s office at Bhadrak.

A large number of supporters and party workers went in a procession along with Suraj, son of Bishnu Charan Sethi, whose demise has necessitated the bypoll.

After the party announced Suraj as its candidate for the Dhamnagar by-election on Sunday, senior BJP leaders toured the constituency on Monday and launched their campaign for the bypoll.

Before proceeding to file the nomination, Suraj paid tributes to Bishnu Sethi and had darshan of their village goddess at Mangarajpur in Tihidi area. He also sought blessings of seniors including his mother Urmila Panigrahi.

“Suraj has been working for the development of the area and welfare of the people in the constituency for quite some time. He is young and dynamic, but needs the blessings of all,” his mother said.

While the last date for filing nomination is October 14, voting will be held on November 3 and the counting of votes and announcement of results will be done on November 6.

While Manmohan Samal of  BJP had won the seat in the 2004 elections, Rajendra Das of BJD was elected from Dhamnagar in 2009 and Muktikanta Mondal of BJD in 2014.