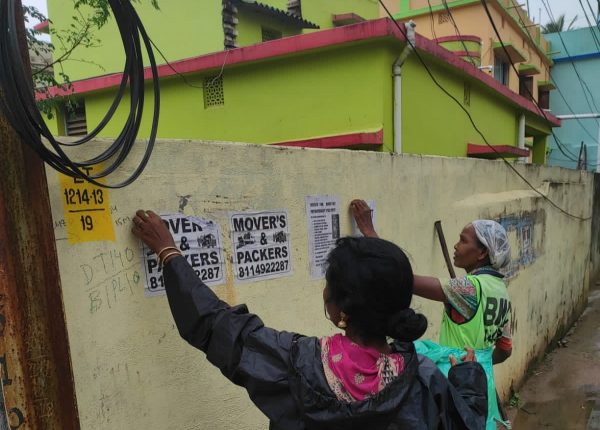 Bhubaneswar: In order to give clean look to surroundings in different localities, the Bhubaneswar Municipal Corporation (BMC) has launched a clean boundary wall campaign in Odisha capital.

In a series of tweets on Wednesday, the BMC appealed to the people not to stick posters and pamphlets on boundary walls of private persons or public institutions in the city.

Stating that it had engaged its workers to clean the walls of posters as part of the drive, the municipality warned that anybody found pasting posters will be imposed penalty. It also called for keeping the city clean and green.

In another tweet, the BMC said it has started the trial run of night sweeping in Ward 40, including Unit I and II markets as well as the residential areas of Unit III from Tuesday. It will be extended to other Wards soon, it added.

According to BMC sources, 45 sanitary workers (sweepers), eight supervisors, and two tractors have been deployed in the trial run. The sweeping will take place between 7.30 pm and 11.30 pm.

BMC Commissioner, Additional Commissioner along with Team BMC checked the cleanliness activities around Unit I Market area. The vendors were sensitised to keep 5 metre surroundings clean, use twin dustbins and hand over the garbage to BMC.