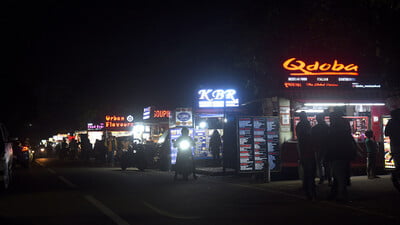 Bhubaneswar: Following complaints that vendors were opening shops without necessary permission at ‘Khao Gali’ in Odisha capital, the Bhubaneswar Municipal Corporation (BMC) has initiated steps in this regard.

According to reports, the shop-keepers of the ‘Khao Gali’, a famous food court near Ram Mandir in Unit II of Bhubaneswar,  had complained to the BMC that a number of unlicensed vendors were selling unhygienic food items in the zone.

They pointed out that the food sol by the vendors would not only put the health of consumers at risk but also earn a bad name of ‘Khao Gali’ shops which were strictly following the hygienic norms of the BMC in preparing and serving the food.

Besides affecting their business, these illegal vendors were creating crowding and littering the place which might lead to spread of COVID, the licensed shop-keepers said.

Following the complaint, the BMC has put up a ‘No Vending Zone’ signboard at the ‘Khao Gali’. It has also warned that criminal case will be filed against the vendors who would violate the rules.

It may be noted that the BMC enforcement team had conducted a raid and warned the vendors against opening shops in the zone two days ago. But, the vendors have come back to the area from next day.

The Khao Gali, which was declared ‘Clean Street Food Hub’ by the Food Safety and Standards Authority of India (FSSAI) later year, was shut down by the BMC for lack of adequate cleanliness and violation of other civic norms in May.

After remaining closed for nearly two weeks, the Khao Gali was allowed to reopen following a meeting of the shop-keepers with mayor Sulochana Das. The BMC had set 22 conditions for the vendors to resume business at the location.