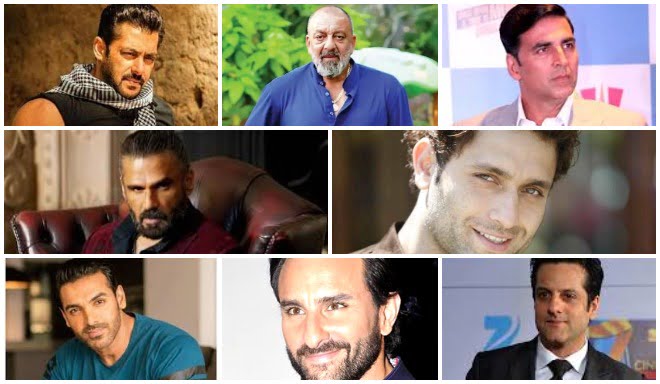 While several celebrities came out in Rhea’s support and termed her arrest as illegal, others wanted the actress to be punished if she was guilty.

However, it should be noted here that Rhea is not the only tinselville celeb, who has gone behind the bars for messing up with the law.

Here is a list of Bollywood actors, who have spent time in jail just like the commoners, for breaking the law:

1. Salman Khan: The actor was booked for two serious crimes- the hit and run case and for hunting a blackbuck while shooting for ‘Hum Saath Saath Hai’ in Rajasthan.

2. John Abraham: In 2006, John was speeding his Hayabusa, when he lost control and injured two pedestrians. The actor had to spend 15 days in jail and he also paid a penalty for rash driving.

3. Sanjay Dutt: The actor was sentenced to 5 years in jail for possessing illegal arms during the serials of blasts in Mumbai in 1991-1993. Sanjay was released from jail after he completed his five-year term in February 2016.

4. Akshay Kumar: In 2009, a case was lodged against Akshay for requesting his wife Twinkle Khanna to unzip his jeans at the Lakme Fashion Week. The actor was booked for indulging in obscenity at a public place. Akshay had to spend some time in jail but was later released on bail.

5. Saif Ali Khan: The actor was arrested following a complaint by Mr. Sharma. Mr. Sharma alleged that Saif assaulted him and fractured his nose at Taj Hotel’s Wasabi restaurant in Colaba. Saif was taken into custody and was released on bail the same day.

6. Suniel Shetty: The actor was arrested after a businessman alleged that a cheque worth Rs 10 lakh issued by Suniel bounced. Suniel was jailed in a cheque dishonor case and was later granted bail.

7. Shiney Ahuja: The actor was arrested on charges of raping his maid. Shiney was found guilty by a special fast-track court and was sentenced to seven years in prison.

8. Fardeen Khan: In 2011, the actor was arrested for possessing cocaine. Following the arrest, Fardeen underwent a detoxification course and in 2012, he was granted bail.

9. Aditya Pancholi: In 2005, the actor was sentenced for one year in prison for assaulting his neighbor over a parking quarrel in his housing society.

10. Inder Kumar: In 2014, Inder Kumar was arrested for raping his girlfriend, who was a model. The victim alleged that Inder had called her to his apartment on the pretext of getting her roles in films and raped her.

Also Read: When Taapsee Pannu Was Called Bad Luck Charm; Replaced In A Film At Behest Of Hero’s Wife