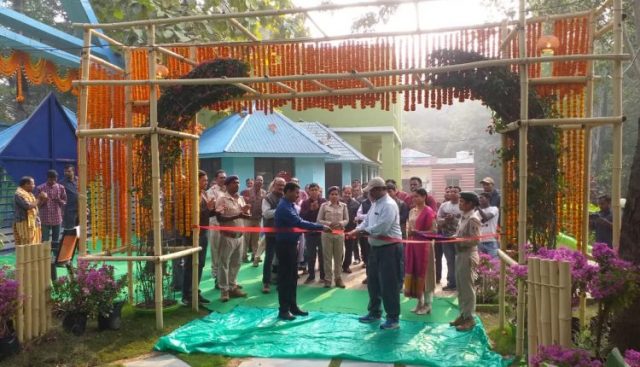 Sambalpur: A botanical garden in the zoo at Motijharan was inaugurated by the Principal Chief Conservator of Forest and head of Forest Force, Debidutta Biswal on Wednesday.

According to sources, it is located within the forest inside the zoo in an area of four hectares and has a kilometre of foot trail surrounded by plants. The botanical garden has more than 500 flowering species including Gravelia and Ficus.

While the zoo opens at 8 am, the garden will be open from 6 am to 6 pm. Visitors will be charged Rs 5 as an entry fee for the garden. Monthly passes may also be issued for daily visitors. The authorities have also made available a battery-operated vehicle for the elderly.

Besides, there is a cafeteria and tea centre, called Debrigarh Aroma, outside the zoo.

Hirakud DFO Anshu Pragyan Das said the botanical garden has been developed utilising wasteland within the zoo. Apart from the foot trail, it has a park with a lawn and a seating area for walkers.

The zoo, located in the heart of the city and established in 1980 is one of the oldest in Odisha.

Currently, it houses at least 230 birds and animals of 18 different species including a leopard and a bear. While the zoo has been categorised as small, a proposal has been sent to Central Zoo Authority to upgrade it to the medium category. The zoo records a footfall of around 800 people daily on an average.