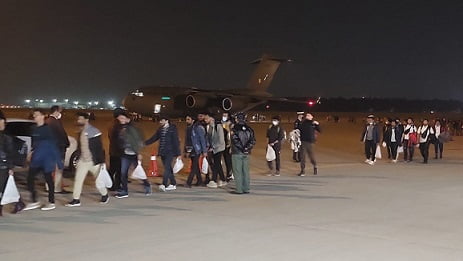 United Nations: Russia has informed the UN Security Council (UNSC) that its buses were waiting at crossing points to go to Kharkiv and Sumy to evacuate Indian students and other foreigners.

At an emergency session of the UNSC on Friday, Russia’s Permanent Representative to the UN Ambassador Vassily Nebenzia said that Ukraine nationalists were keeping over 3,700 Indians “by force” in Kharkiv and Sumy in eastern Ukraine.

“In the Belgorod region of Russia, 130 comfortable buses have been waiting since 6 am today at the crossing points Nekhoteevka and Sudja ready to go to Kharkiv and Sumy to evacuate the Indian students and other foreign nationals,” he said.

He said that the checkpoints had temporary accommodation, space for rest and hot food. There are also mobile medical stations.

“Everyone evacuated will then be taken to Belgorod, and from there transported to their homeland by air,” he said.

India has appealed for a ceasefire to allow the evacuation of stranded nationals.

In New Delhi, responding to reports of Indian students being held hostage in Ukraine, Ministry of External Affairs spokesperson Arindam Bagchi said India has not received any reports of any hostage situation.

An Indian student, Harjot Singh from New Delhi, was shot at on Friday while trying to escape Kyiv. He was brought back to Kyiv and hospitalised.

Naveen Shekharappa Gyanagowda, a fourth-year medical student at Kharkiv National Medical University, was killed on Tuesday when he had stepped out and went to a nearby supermarket to buy groceries.

Fire Breaks Out On Premises Of SCB Medical In Cuttack