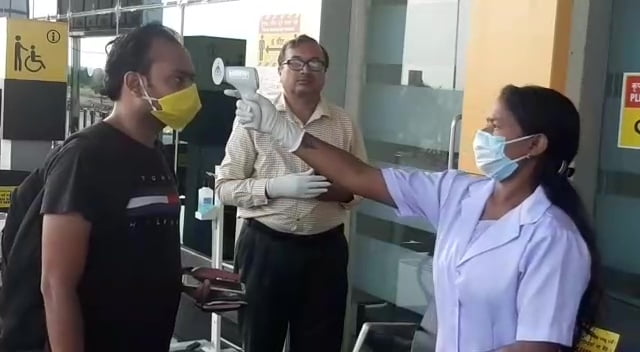 Cuttack/Bhubaneswar: Four new COVID-19 cases have been reported from another private educational institute in Cuttack city while three girl students of a private engineering college, on the outskirts of Bhubaneswar, have also tested positive for the virus.

Contact tracing of the infected person was carried out and swab samples from some suspected cases were sent for laboratory test, he added.

Notably, COVID testing and health screening are underway in all educational institutions in the city following the detection of a large number of positive cases.

March 18: 12 students of a private college in the city were found infected

March 19: 13 more from the college tested positive for the virus

March 20: The infection was also reported in 17 persons of another educational institution.

On Monday ( March 22), the city reported 19 new cases and three among them were from Arundoya Marg, Link Road, which houses educational institutes.

This has pushed the number of active cases in the city to 107.

After 28 cases from Xavier Institute of Management, Bhubaneswar, the three new infections have parents express concern over the safety of their wards.

Those infected were hostel boarders. While two of them reportedly returned to their house in Jajpur district after contracting the virus, another student underwent isolation in the hostel.

Swab samples of the three were tested in Khurda after they developed COVID-19 symptoms. Contact tracing is underway, sources added.

The cluster at XIMB is one of the biggest in the state since the outbreak of the pandemic in the state last year.

Analysis of the travel history of most infected persons in XIMB and private institute in Cuttack shows that they had returned from high-risk states, including Maharashtra and Tamil Nadu, The New Indian Express reported.

The new cases have pushed the active cases in Bhubaneswar beyond 100.