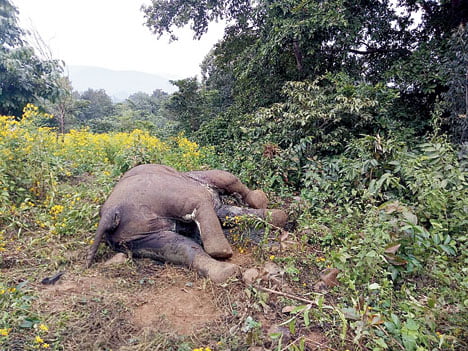 Bhubaneswar: Amid a spurt in the deaths of elephants in Odisha in recent months, a high-level central team visited the state to probe into the incidents and submit a report to the Centre, reports said on Tuesday.

The three-member team, constituted by the Union Environment, Forest and Climate Change Ministry (MoEFCC), visited three wildlife divisions in Odisha and held meetings with senior forest officials in the state, they said.

Constituted after the recent increase in elephant deaths and poaching raised serious questions about Odisha’s wildlife conservation measures, the panel is expected to submit its findings and recommendations to the Ministry soon.

As per data, Odisha has recorded at least 22 elephant deaths, the majority of them believed to be due to poaching since June, this year. Four unnatural deaths of elephants were reported in the last five days in different places. In June, eight elephants were found dead and seven each in July and August, sources said.

Wildlife experts and environmentalists have voiced concern over the incidents and want the state government to take quick steps to step up patrolling to check activities of poachers.

The central team, during its visits to different forest areas, was stated to have interacted with the field staff in places where elephant deaths were reported. it also collected details of elephant deaths in the last five years and the status of ongoing probes into organised wildlife crimes, they said.

After wrapping up its Odisha visit, the team is expected to undertake a similar exercise in Jharkhand to look into elephant deaths in that state.

Notably, a forester and a forest guard have been placed under suspension in connection with the electrocution death of two elephants inside Krishi Vigyan Kendra at Judia in Keonjhar, five days ago, on charges of dereliction of duty. The electricity department of Keonjhar Sadar range has also been issued a show-cause notice in this connection.

I Accept What I Have Written In My Article, Says Shashi Tharoor On Running For Cong Chief Post Reports