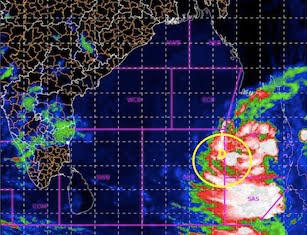 Bhubaneswar: The depression over southeast Bay of Bengal and adjoining south Andaman Sea, moved north northeastwards at a speed of 12 kmph and lay centered over the same region at 11.30 am on Sunday, the India Meteorological Department said.

The system is about 140 km south of Port Blair (Andaman Islands) and 800 km south-southwest of Yangon (Myanmar). It is likely to move nearly northwards along and off Andaman & Nicobar Islands, intensify into a deep depression during the next 24 hours and into a cyclonic storm during the subsequent 12 hours.

Tweeting about this rare March storm, senior meteorologist Jason Nicholls said that the depression near the Andaman and Nicobar Islands will become a deep depression and then Cyclonic Storm Asani in the next day or two. “Asani is expected to strike Myanmar around Tuesday. Flooding rains will be the main threat,” he added.