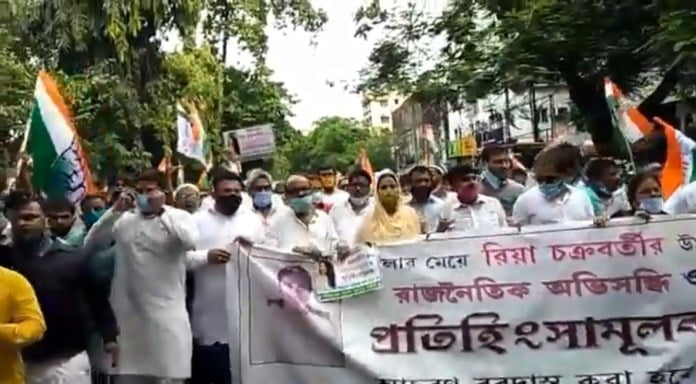 Kolkata: The West Bengal Congress on Saturday took out a rally to support actress Rhea Chakraborty, the prime suspect in the Sushant Singh Rajput death case.

According to a tweet by INC, the rally was taken out from the Congress office to Wellington junction in Kolkata on the instructions of Adhir Ranjan Chowdhury, president of the West Bengal Congress.

“Political conspiracy and vindictive behaviour against Rhea Chakraborty, the daughter of Bengal, will not be tolerated,” the party tweeted.

Earlier, Chowdhury had accused BJP of turning Sushant’s death into a political row ahead of the Bihar elections.

“Rhea Chakraborty has been indicted not for abetment of suicide or murder or any economic offences; she has been arrested under NDPS, ludicrous,” he had said.

Rhea's father is a former military officer, served the nation. Rhea is a Bengalee Brahmin lady, justice to actor sushant rajput should not be interpreted as a justice to Bihari.#SushantSinghRajputCase
(4/n)

Rhea is currently under judicial custody at Mumbai’s Byculla jail and the NCB probe is underway.

Woman Raped In Front Of Her Kids In Pakistan; Police Chief Says She Shouldn’t Have Travelled Alone