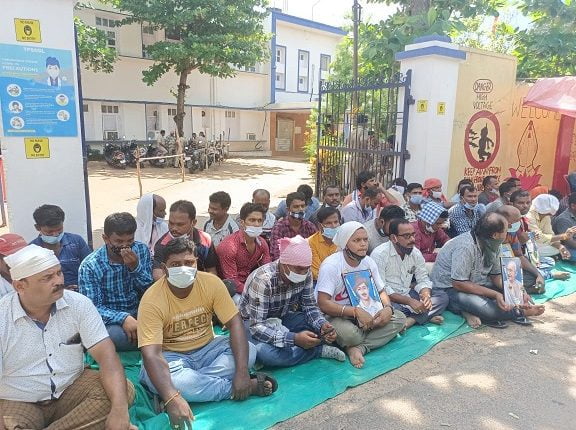 Berhampur: The contractual employees of Tata Power Southern Odisha Distribution Limited (TPSODL), who have been sitting on dharna in front of their office, here for the last 65 days, have threatened to take their protest to streets if their demand is not fulfilled soon.

The contractual employees under the banner of the Odisha Bijuli Karmachari Sangha, affiliated to Centre of Indian Trade Unions (CITU), resorted to dharna to press their demand for regularisation of their jobs as promised by the company earlier.

When the TPSODL took over the power distribution in January this year, it had promised the government that it would regularise the jobs of 200 contract employees, said Rabi Rath, advisor of Odisha State Electricity Board (OSEB) Workers Federation and vice-president of Hind Mazdoor Sabha (HMS) Odisha unit.

“It is ‘betrayal’ on the part of the TPSODL. The company must start the process to regularise the contract employees,” said Rath who has been supporting the protesting employees.

In 2018, when the Southco was the distribution company under the state government, the employees had staged dharna for 28 days. They called it off after an agreement was reached with the then energy secretary Hemanta Sharma that the jobs of 200 contractual employees will be regularised to bring them under the payroll of the company.

Rath further said when the government handed over the management and operations of power distribution to South Odisha to Southern Electricity Supply Company of Odisha Limited (Southco) in 1999, there were 4,200 regular employees, no contract employees and 2.69 lakhs consumers.

Stating that the TPSODL must keep its words and regularise the jobs of contractual employees, Rath said if it fails to do so, they will resort to agitation across south Odisha.

When contacted, Sunil Rath, a senior officer of the HR Department of TPSODL Berhampur Head Office, said he was not authorised to reveal details about the regularisation process of contractual employees.

At present, the TPSODL is the power distribution company for eight southern districts including Malkangiri, Nabarangpur, Rayagada, Koraput, Ganjam, Gajapati, Boudh and Kandhamal.

Out Of The Ordinary: Former Bureaucrat Grows Pearls In Her Backyard At Odisha’s Balasore