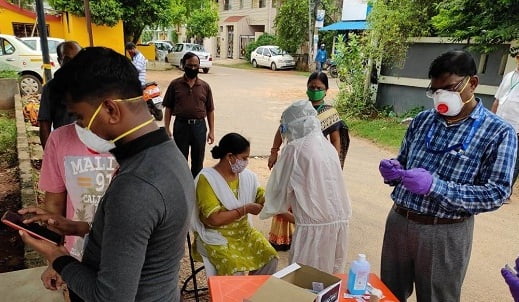 Bhubaneswar: To contain the spread of the COVID-19, the Bhubaneswar Municipal Corporation (BMC) in association with the Regional Medical Research Centre (RMRC), began serology surveillance in the city on Saturday.

Talking to the media, RMRC director Sanghamitra Pati said that the aim of the surveillance is to ascertain the immunological status of the community and high-risk groups.

She said that in the first round surveillance, which will be held on July 11 and 12, random samples will be collected from different high-risk groups and community members like Immuno-compromised patients, health care workers, security personnel, media persons, municipal workers, drivers, prisoners, shop keepers/ vendors, airport workers, urban slum dwellers and those residing in containment zones.

As decided, the surveillance in 25 wards will be completed in two rounds with 2500 tests in each round. The first-round surveillance will continue for 10-12 days while the second round will start after four weeks.

For the first-round surveillance, five teams have been formed with 7-10 lab technicians in each team. About 1600 samples will be collected from high risk and slum pockets and 900 from community members.

Stating that about 25,000 antigen test kits have been sent to different government hospitals and medical colleges and hospitals, the RMRC director said the order for another one lakh kits has already been placed.

COVID-19: 11-Day Lockdown Clamped In Pune From July 13 After Sharp Rise In Cases