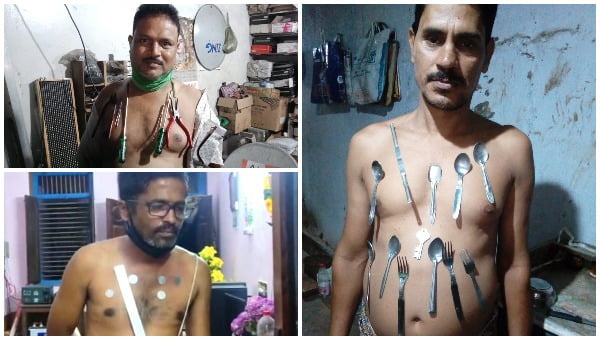 Bhubaneswar: People in Odisha have also been claiming about having developed magnetic powers after taking a second dose of the COVID vaccine by sharing pictures with steel spoons, coins and other objects sticking to their bodies.

Such cases are being reported from different parts of Odisha.

Babuli Moharana of Talcher’s Ramachandra Bazaar said that plier, screwdrivers and other objects made of iron have started sticking to his body. “I came across a viral video where a person had claimed that his body developed magnetic properties after the second jab. I tried the same at home and the result shocked me,” he said.

A large number of people gathered at his house to see the unusual phenomenon. He has contacted a doctor on the matter.

Moharana said he suffered from no other side effects after vaccination. He took the second jab on April 8.

An auto-rickshaw driver, Gajendra Mohapatra (47), of Nilagiri in Balasore district also claimed that he developed magnetic powers two months after taking the first dose of the vaccine. He is yet to get the second jab.

Baladev Panigrahi, a resident of Arua Sahi in Sorada town, said that he experienced strange magnetic powers after taking the second dose of Covashield on June 10. “Stainless steel spoon, coins and others started sticking to my body after I received the second jab,” he added.

Are these claims true? Let’s read what the experts have to say:

Director of Public Health Dr Niranjan Mishra told Odisha Bytes that the government has received no formal complaints in this regard. “What they are claiming is completely irrational. How can a body develop magnetic powers after being inoculated with a vaccine? It is beyond scientific analysis,” he said.

Lambodar Prasad Singh, former Prof of Physics, Utkal University challenged people to upload videos showing that their bodies are attracting iron objects. “The videos and pictures doing the rounds on social media only show iron objects sticking to their body. That could be because of sweat or adhesion,” he said.

By making such flawed claims they are unnecessarily creating confusion and panic among people, he said.

“Unscientific and irrational beliefs have wide currency in our society. There have been such instances in the past too when people claimed that idols of Ganesha were drinking milk,” he added.

The Centre has already debunked claims that COVID vaccines can make people ‘magnetic’. It has also discarded theories about microchips in coronavirus vaccines.

“Vaccines cannot cause a magnetic reaction in the human body. COVID-19 vaccines are completely safe and do not contain any metal-based ingredients. It is common to experience mild side-effects like mild headaches, pain or swelling at the injection site, and mild fever after getting the COVID-19 vaccine,” said the Press Information Bureau’s (PIB) fact-checking arm, PIB Fact Check.

“Do not fall prey to misinformation about COVID-19 vaccines and get vaccinated,” it added.