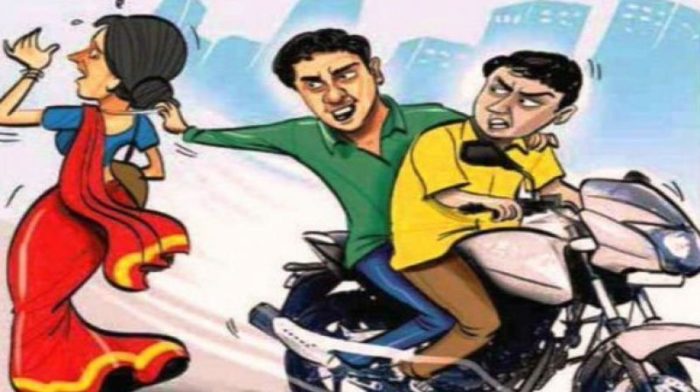 Bhubaneswar: The Odisha capital is turning out to be very unsafe for women, with 14 falling prey to incidents of snatching and loot in the past one month.

In the latest of such incidents, two cases of loot in broad daylight were reported in the city on Tuesday.

Sources said two unidentified criminals snatched the gold ornaments of a woman railway employee at gun-point at Mancheswar railway station. The victim was waiting to board a train to Berhampur in the morning when she was robbed.

Two loots in the broad daylight in the Odisha capital on Tuesday have put a big question mark on the safety of the city denizens.

In the other incident, some unidentified miscreants looted cash from a woman bank employee at Gadakana. The woman was injured in her attempt to resist the snatchers.

According to police data, 764 women have become victims of snatching and loot in Bhubaneswar from 2014 till date.

The Commissionerate Police have arrested 558 accused in this connection, Minister of State for the Home Department, Dibya Shankar Mishra had told the Odisha assembly on Monday. The minister was replying to a question by MLA Tara Prasad Bahinipati.

2014: As many as 98 cases of snatching and loot of women were recorded and 100 arrested in this connection.

However, these numbers are based only on police station diaries. There are also many cases that are not reported.

Mishra informed the Assembly that the state government has taken taking several steps to curb crime against women.

“We have a mobile application ‘Mo Sathi’. Women can use it while facing any crime. For the safety of women, pink auto facilities are also available. Besides, police patrolling at night have been tightened. CCTVs have also been installed at many places of the city,” he said.