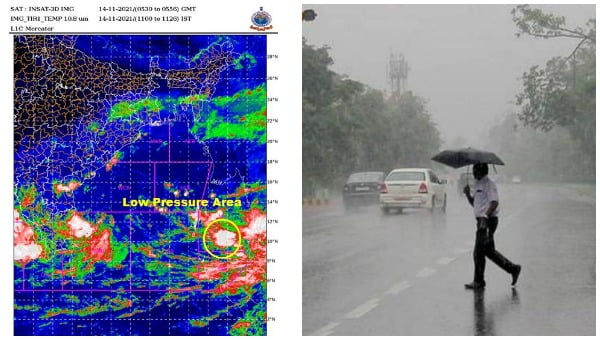 Bhubaneswar: The Bhubaneswar Meteorological Centre here has forecast light to moderate rain for some parts of Puri, Cuttack (including Cuttack city), Jagatsinghpur, Kendrapada, Dhenkanal, Jajpur, Angul, Jharsuguda, Balangir and Nabarangpur in the next two hours.

“The low-pressure area over central parts of the Andaman Sea is likely to move west northwestwards and become well marked over the north Andaman Sea and adjoining southeast Bay of Bengal by November 15. Thereafter, it is likely to continue to move west–northwestwards across east-central and adjoining southeast Bay of Bengal, concentrate into a Depression over the west-central Bay of Bengal by  November 17 and reach near south Andhra Pradesh coast around November 18,” the Met office said in its mid-day bulletin.

The trough from the cyclonic circulation over north interior Tamil Nadu to Gangetic West Bengal across Andhra Pradesh and Odisha extending up to 0.9 km above mean sea level has become less marked, it added.

While some places in Odisha will witness thundershowers in the next two days, the IMD has issued a yellow warning for November 17 and 18.

Heavy rainfall to lash one or two places in Ganjam and Gajapati.

Heavy rainfall is very likely at one or two places in Ganjam, Gajapati, Rayagada, Koraput and Malkangiri.

After Rajkummar & Patralekhaa’s Fairytale Engagement, Know What The Bride Will Wear On Wedding