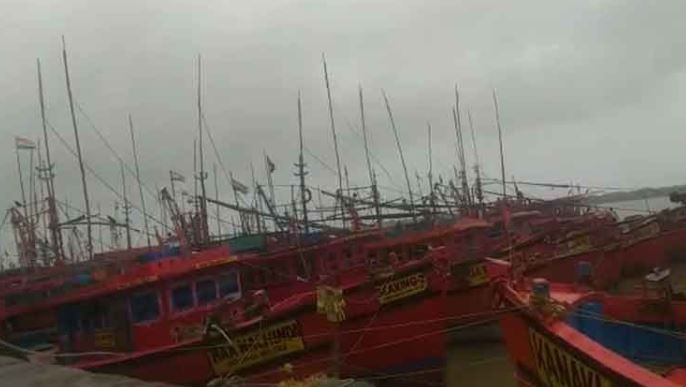 Bhubaneswar: Fishermen in more than 50 trawlers from West Bengal are reportedly heading towards the Odisha coast after they failed to reach their homeland due to inclement weather conditions in the Bay of Bengal and the very severe cyclonic storm ‘Bulbul’.

According to sources, the fishermen had gone for a deep-sea fishing on Friday. On their way back, they could not move beyond Kantai along the East Medinipur coast due to strong wind and high tides. Finding no other alternative, they sought help from the West Bengal government.

The West Bengal chief secretary had a telephonic conversation with the Odisha government requesting it to allow these fishermen to halt at Dhamra in Bhadrak district. Acting on the request, the state government allowed the fishermen to dock at Dhamra fishing harbour till Cyclone Bulbul crosses West Bengal.

Till reports last came in, about 10 trawlers had reached Dhamra coast and the remaining trawlers were expected to drop anchors soon.

Meanwhile, the Marine police of Chandbali and the Dharma Fishermen’s Association have made elaborate arrangements for the accommodation of the West Bengal fishermen.

The fishermen will leave for their homeland after the cyclonic storm makes the landfall, the sources added..

Cyclone Bulbul Impact On Odisha To Peak By Midnight!

No SPG Cover For Sonia, Rahul & Priyanka, To Get Z+ Security Instead