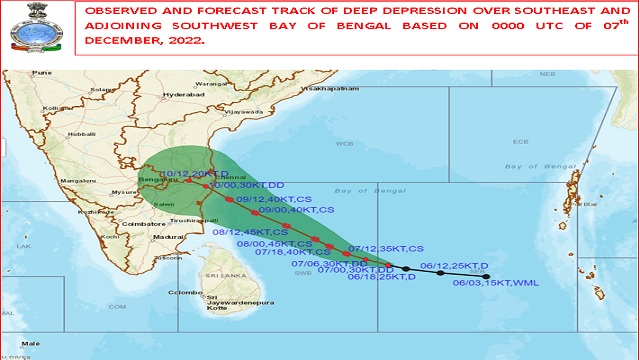 Bhubaneswar: The depression over southeast Bay of Bengal has concentrated into a deep depression and is likely to further intensify into a cyclonic storm by Wednesday evening, India Meteorological Department (IMD) informed.

“The Depression over southeast Bay of Bengal moved west-northwestwards with a speed of 12 kmph during past 06 hours, intensified into a Deep Depression and lay centred at 5.30 am, on December 7, 2022 over Southeast & adjoining Southwest Bay of Bengal, near latitude 8.6°N and longitude 86.4°E, about 570 km east of Trincomalee (Sri Lanka), about 710 km eastsoutheast of Jaffna (Sri Lanka), about 770 km east-southeast of Karaikal and about 830 km southeast of Chennai,” IMD tweeted.

Notably, some projections suggest that this system will decline into a ‘depression’ again before making landfall around Puducherry on Friday afternoon (December 9).

Also Read: Cyclone Mandous Likely To Form Over Bay By Dec 8; Who Named It & What It Means