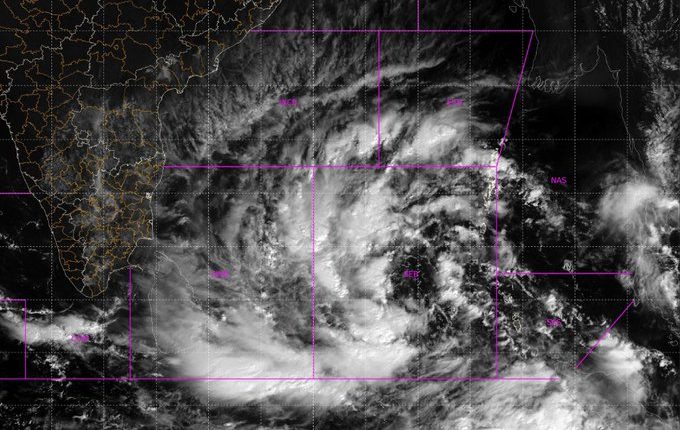 “It is likely to move west­northwestwards and concentrate into a depression over southeast Bay of Bengal by today evening. Thereafter, it is likely to continue to move west­northwestwards, intensify further gradually into a cyclonic storm and reach southwest Bay of Bengal near north Tamil Nadu­-Puducherry & adjoining south Andhra Pradesh coasts by December 8 morning.,” it added.

“We haven’t given a forecast for landfall yet,” said RK Jenamani, senior scientist at the weather office.

Some projections suggest that this system will decline into a ‘depression’ again before making a landfall around Puducherry on Friday afternoon (December 9). If the system completely evolves into a tropical cyclone, it will be the second post-monsoon cyclone after ‘Sitrang’ and will be named ‘Mandous’, as suggested by the United Arab Emirates. In Arabic, Mandous means a treasure box.

Most places in Andaman & Nicobar Islands will experience rain and squally weather with wind speed reaching 40-45 kmph gusting to 55 kmph on Tuesday (December 6). Rain is likely to start over north coastal Tamil Nadu, Puducherry and Karaikal from December 7 midnight and increase on December 8 and 9, the weather bureau said.

While the system is unlikely to have any impact on Odisha, the MeT office has forecast a fall in night temperature in the state by about 2°C.

“A tropical low over the south Andaman Sea will strengthen to a depression in the next day or so & can become a cyclonic storm before threatening Andhra Pradesh, Tamil Nadu & Puducherry late this week,” leading meteorologist Jason Nicholls tweeted.